IBC2017: The IABM breakfast session was dominated by the word ‘consolidation’ and quirky research contradictions. 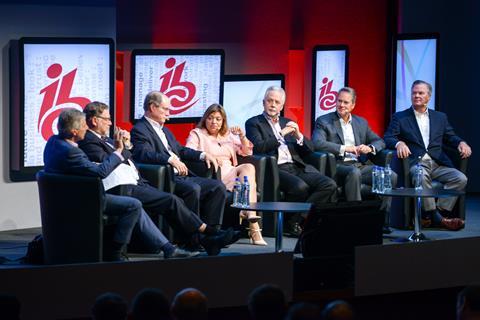 The split between traditional and non-traditional broadcast operations stands at 41% to 59%, but traditional will slide further to 36% within two years.

On the buying side the big risers are IP infrastructure, social media broadcasting and cyber security.

White suggested UHD is in the slow lane compared to AI and VR, but questioned how VR will be monetised.

The big stats related to the transition to IP – interoperability being vital to 98% of users,72% of whom also want best of breed.

“The quirk is the rise of internal development to 35%,” said White. “Maybe we are going back to bespoke in-house development.”

He added: “Profit margins are not there for the new media methodologies, so we will see considerable consolidation.”

Avid Technology President Jeff Rosica highlighted opposing views in the report. He said: “On the one hand it was all about efficiency and cost reductions, but on the other it was best of breed and interoperability, but this is hard for technology companies who can’t get agreement on IP and HDR standards. That just makes it more expensive for us.

“Our customer base is struggling with 1,800 vendors in a relatively small industry. $50 billion is just a Monday at Microsoft,” he added.

Imagine Communications Chief Executive Charlie Vogt said: “Our industry is getting ready to go through a bit of a revolution.

“We have been trying to figure out how we consolidate around a customer base that is consolidating around us.”

A hundred key customers have become 20, which has put a lot of strain on suppliers.

Neulion Executive VP of Market Strategy said:“I did not see much in the report about what’s actually driving all this – the smart phone. That has the ability to deliver high quality video, and you add into that the consumer’s preferences for personalising experiences.