IBC2017: Among the guests at a reception to mark IBC’s 50th anniversary were two very special guests. 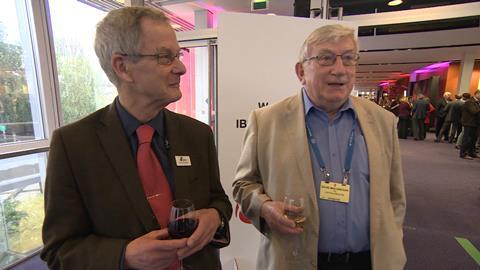 Martin Salter and David MacGregor: present at every IBC since 1967

David MacGregor and Martin Salter both attended the 1967 convention – and every single IBC since.

MacGregor recalled that “in 1967 I was involved in launching EMI’s model 2001 colour camera. It took four men to life it, and a rack of electronics to make it work. And of course it produced pictures which were not as good as you get from your mobile phone today.”

Salter agreed, pointing out the transformation that digital technology had brought to the storage of video. “A 1960s era video tape recorder weighed many hundreds of kilos and cost many hundreds of thousands of dollars. Now a single half-gram SD card can provide all of that same capability with much higher quality.”

”Today, you have the freedom to choose between thousands of channels”

Both men pointed to the transition to digital technology, accompanied by a move to software products, as the seminal change in the last 50 years.

“In the early days of IBC there might be half a dozen new products you had to see,” MacGregor recalled. “Now we have moved to software, there’s probably thousands of them.”

Salter pointed out that digital technology enabled multiple channels and multi-platform delivery. At the time of the first IBC in 1967, the UK had just three television channels.

“You were told what you had to watch,” MacGregor added. “You watched the news at 6pm, because that was when the news was broadcast.

The other great benefit of today’s digital technology is that it is, by and large, stable and predictable. This is in stark contrast to the first IBC shows.

“The thing that reminds me of those early days,” Salter recalled, “was that every single exhibitor had more engineers on site to keep the product working than there were salesmen trying to sell it.”