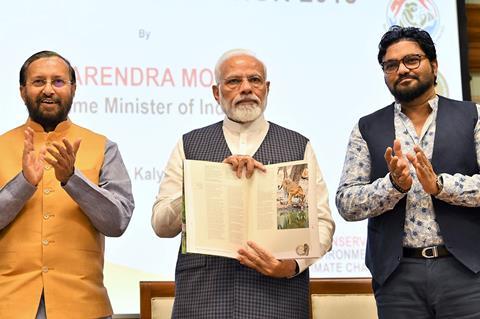 India’s Ministry of Information and Broadcasting has opened talks with members of the India broadcasting and media industry about creating a National Broadcast Policy.

The aim of the policy will be to address issues that are challenging the sector, with the aim of promoting more self-regulation, though no timeframe was given, according to Television Post.

The deliberations were announced by information and broadcasting minister Prakash Javadekar in the Lok Sabha, the Indian parliament’s lower house.

The Indian Broadcasting Foundation, the News Broadcasters Association and the Association of Radio Operators for India have all held meetings with government officials according to reports.

“In order to create an enabling environment for broadcasting and ensuring transparency, non-discrimination, consumer protection and orderly growth of the sector, the deliberations/consultations on a National Broadcasting Policy are being held with various stakeholders,” Javadekar said.

“The formulation of such a policy has multi-dimensional implications and it needs to be firmed up after due process. Therefore, no time frame can be indicated for the finalization of the policy.”

MIB had previously announced that it plans to work alongside the Federation of Indian Chambers of Commerce and Industry (FICCI) to develop the National Broadcast Policy.

During a speech at the FICCI Frames event in March, MIB secretary Amit Khare explained that a draft proposal of the policy was being prepared, after the ministry received an approach from FICCI to develop a national media policy. The ministry instead opted to develop a broadcast policy, as the term media was too wide reaching.

According to a report in the Economic Times, the industry has told MIB that the policy should look to safeguard media freedom. While the sector should have a regulator of its own.

In its submission, the Indian Broadcasting Foundation reportedly told the ministry that the threat of legal action with punitive damages would lead to a chilling effect on the publication of free and independent news and put undue pressure on journalists”, with the industry body calling on the ministry to ensure a “safe environment” for journalists.

Other requests include allowing for a self-regulation code for content production and distribution for OTT video streaming services, the ET reports.

It comes as the ministry is also looking at developing a policy or strategy paper for the film industry, which will prepare a broad outline for the industry until 2025. It will consider issues including government incentives, regulation and other issues that might impact the film industry.