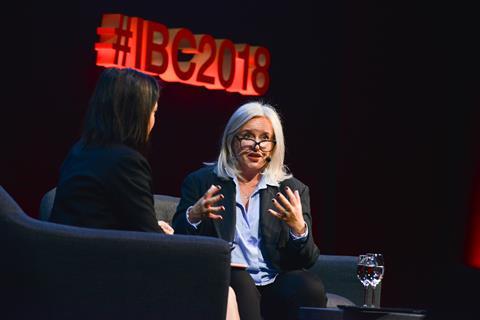 Endemol Shine Group executive Lisa Perrin has joined ITV Studios as managing director of International Studios where she will oversee its leading production assets outside of the UK and US.

Perrin will join as part of the senior management team and will report directly to Julian Bellamy, managing director of ITV Studios, where she will develop ITV’s business strategy and vision as well as identify growth opportunities in new and existing markets.

In an internal memo sent to Endemol Shine employees and seen by IBC365, chief creative officer Peter Salmon shared the news of Perrin’s appointment and reassured staff her departure leaves the Creative Networks business “in a strong place with a strong team supporting our shows.”

He added: “Though we are of course very sad to see Lisa go, she does so with our thanks and have put in place a framework for Creative Networks to support and supercharge emerging and established IP across the Group. An approach we intend to build on.

“Creative Networks responsibility has sat with me at a Group level these past four years and I’ll take a more hands-on management role in the coming months, with Lisa’s duties also assigned throughout the very able Creative Networks team, bolstered by two new recruits.”

Working closely with Salmon, Townley will lead the Creative Networks team working from both London and Amsterdam, focusing on the content pipeline and coordinating non-scripted streamer projects.

Salmon said: “James’ energy, experience and close working knowledge of our pipeline and Group, along with the insight on buyers’ needs from his current role make him ideal to step in and lead the team.”

Salmon said: “Sarah is well-versed in working across a broad pan-European slate. Her extensive production and technical experience will be invaluable in driving our ambitions for further production collaboration and efficiencies within our Group.”

Townley begins his role immediately and Sedazzari will join the company next month.

In the memo, Salmon emphasized the “already strong team” and outlined his plans, which includes focusing and supporting the investment in the company’s IP as well as its new entertainment formats, scalable and affordable shows from linear and streamer buyers.

Upon accepting the new position, Perrin replied to the team: “It’s been a privilege to be at the centre of such a talented and creative Group, and been incredibly rewarding to help such an array of outstanding shows reach new audiences around the world over the last five years.

“But when opportunity knocked for a new chapter it was a ‘now or never’ offer, and it was a challenge I wanted to take.”

She will work closely with ITV MDs based in Australia, France, Germany, Middle East, Netherlands, Finland, Sweden and Norway as well as Tetra Media Studios in France, Talpa and Imago in Germany, Cattleya in Italy and United in Denmark.

Perrin’s appointment completes the senior management team for the reorganised international distribution and commercial business, which the company said “strengthens ITV Studios’ position as a creator, producer and distributor of world-leading programmes.”

As part of the reorganisation of the international and commercial division, Mike Beale will hand management of the Nordics territories to Perrin which will enable him to focus on an expanded worldwide creative role as managing director of Global Creative Network now reporting directly to Bellamy.

Bellamy said: “With a rare balance of creative and commercial talent, Lisa is an inspiring and dynamic leader.

“I have no doubt that she will bring great vision, drive and flair to this increasingly important part of the Studios business.”

Perrin’s career has seen great success in launching and rolling out formats including The Wall and All Together Now (16 territories and the biggest travelling format of 2019), as well as sustaining the rollout and renewal of Big Brother and MasterChef and successfully launching new formats such as Sounds Familiar (35 territories), Hunted (10 territories) and Stripped (nine territories).

She previously held the role of director of commissioning, Entertainment at UKTV from 2008 – 2011 and prior to this had several production and development roles at progressive levels of responsibility.

Upon accepting the new job, Perrin said in a statement: “I’ve loved my time at Endemol Shine - it’s been a wonderful journey. I will miss many of my colleagues there.

“I’m truly excited to be joining ITV Studios and to be part of the new international team, working with the incredibly talented production companies around the world who are creating and producing so many hugely successful, award-winning programmes loved by global audiences.”