Locast launches countersuit against US broadcasters 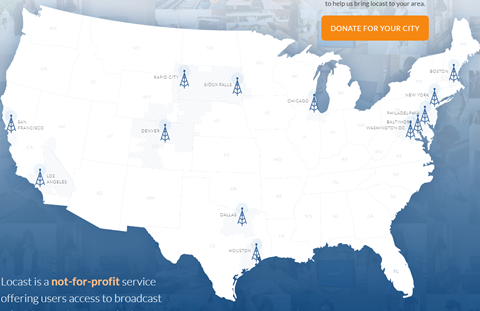 Locast: Filed lawsuit against ABC, CBS and others

Non-profit streaming service Locast has issued ABC, CBS, Fox, and NBC with a countersuit accusing the four US broadcasters of engaging in antitrust conduct.

Locast streams content from the broadcasters through its app as free services in 13 US cities. In July, the broadcasters partnered to take legal action against Locast, accusing the service’s founder David Goodfriend of copyright violations.

In a countersuit, which was filed last week in the Federal District Court of Manhattan, Locast claims its status as a non-profit means it has the legal right to rebroadcast local stations without a copyright license.

Goodfriend – formerly a VP of law and public policy at DISH Network – claims the company, which he started in January 2018, benefits from a “Congressionally-designated exception to infringement,” namely § 111(a)(5) of the Copyright Act.

According to CNN, the lawsuit also claimed the broadcasters have colluded and misused copyrights to expand their market power beyond what those copyrights were intended to protect.”

“The pay-TV providers get rich. Plaintiffs get rich. The public gets fleeced,” the lawsuit read.

Locast cited YouTubeTV as an example of a company that had come under pressure from the broadcasters not to provide access to Locast. In its complaint, the company says Google executives told Locast in April of conversations with the broadcasters.

The complaint also alleges that the networks were failing to transmit their content with enough power, “forcing consumers” on to cable, satellite or the broadcaster’s own OTT services.

The legal battle could have major implications for cord-cutting in the US and will follow on from a 2014 Supreme Court decision, which found that a streaming service offering over-the-air stations – Aereo – was illicitly performing copyrighted works.

“We trust the courts to see right through this facade and recognize Locast for what it is — not a public service organization but a creature of certain pay-TV interests with an entirely commercial agenda,” said Gerson Zweifach, an attorney for the broadcasters, in a statement to the New York Times.

One complicating factor is Locast’s business model, which primarily relies on donations from its viewers – believed to be around 700,000 across the 13 cities. Locast has also received $500,000 in funding from US telco AT&T.