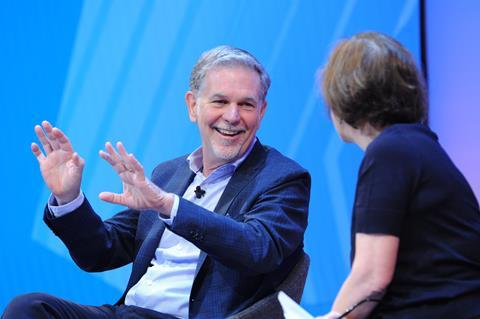 Netflix CEO Reed Hastings said today that the streamer would step up its spend in the UK, its biggest production market outside the US.

Speaking at the Royal Television Society’s Cambridge Convention, Hastings said Netflix had spent £400m in the UK in 2019 and said there would be a “very large increase in how much content is produced here in the UK” next year.

There have been industry rumours that Netflix might buy a facilities house in the UK to handle its growing pipeline of content, but Hastings poured cold water on this. “We are not in the acquisitions business,” Hastings said, noting that the company had made only one acquisition in its history, comic creator Millarworld in 2017.

Hastings said that Netflix wanted to work with many companies and was not in the business of expanding its infrastructure around the UK. “We’re really about trying to find great stories, not so much locations and buildings. You need some of those to be able to do great stories. We’re not trying to create factories.”

Asked about how Netflix viewed the forthcoming launches of rival SVoD services from the likes of Disney and Apple, Hastings acknowledged that there would be “tough competition, no question and consumers will have a lot of choice.”

Hastings added: “But, you know, sometimes you do your best work when you’re really challenged.”

He said the launch of new streaming platforms was “going to unbelievable” for producers in the next couple of years, because they would be able to take their titles to a much wider number of companies, many of whom will raise their bids for the best content.

“The Crown will look like a bargain” in years to come, joked Hastings, who also admitted that Netflix had been outbid by Amazon for Fleabag. “If there’s a show I wished we had, that is one.”

He said Netflix has been prepping for the launch of more streaming platforms since 2012 and expressed surprise that it has taken so long for other big companies to launch their own services.

“When we first did House of Cards, people asked, ‘Why don’t you just licence content?’. We said that because eventually all those companies are going to be direct-to-consumer…We’ve been preparing this for a long time because we’ve known it’s been coming.”

Hastings added: “The main thing I am scared of is that employees will focus on competitors. But there is nothing we can do about them…and so we have to focus on our members…Our members are paying for the content, and then it is up to us to take their money and convert it into shows that people want to watch.”

Hastings also promised that Netflix would be less secretive and defensive about sharing its rights and viewing data with producers and the industry in the future, saying this culture of “hiding information” was learned when it first fought to establish itself in the market. “The things that made us successful, they are the things can trip us up over time as we get large – so we have to grow up into it and be more open.”

He pointed out that Netflix is now sharing data with producers and said “the best solution” would be for measurement firms Barb and Comscore to extend their technology to measure Netflix audiences. “That would be great for us and for everyone.”