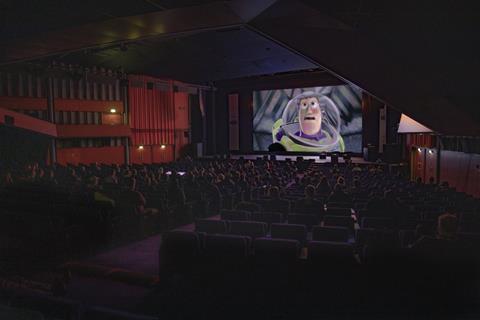 Toy Story 4: Live in the Auditorium Big Screen at IBC2019

Pixar Animation Studio has outlined how it has revisited and remastered 16 of its titles using new technologies such as UHD and Dolby Atmos.

Pixar always makes its beloved films utilising the latest technology, but this has changed dramatically over time. As such, during an IBC2019 panel the studio outlined how, with the upcoming launch of Disney+ and proliferation of UHD capabilities in consumer devices, it has revisited 16 of its titles, which included Dolby Atmos remixes for all of them.

“This is all very exciting but not without its challenges,” said Cynthia Slavens, Pixar’s director of studio mastering and operations, during Monday’s IBC Big Screen session, ‘Toy Story: reviving, restoring and re-imagining, in association with SMPTE’.

Toy Story 4 opened in June and was available in Dolby Atmos and Dolby Vision. All three prior films from the franchise were notable from various technical standpoints: 1995’s Toy Story (1.66 aspect ratio) was the first fully CG animated feature,1999’s Toy Story 2 was among the earliest digital cinema releases, and 2010’s Toy Story 3 was the first 7.1 release.

Other notable milestones included Pixar’s Brave, the first ever Dolby Atmos release; and Inside Out, the first animated Dolby Vision release.

Pixar’s home entertainment supervisor Eric Pearson related that, in starting with these disparate formats, the studio did its best to “responsibly” preserve creative intent in terms of look and feel. “If the remastered version doesn’t feel like the movie, it’s a failure. It’s about story,” he said.

Noted senior scientist Dominic Glynn with a chuckle: “We tried some 8K resolution on A Bug’s Life (the studio’s 1998 title that was made in 2K) and found some things we never saw before.”

He also previewed some of the upcoming work, including the climactic incinerator scene from Toy Story 3 in Dolby Vision.

She was speaking ahead of the Monday night screening in the Big Screen of Toy Story 4.