NAB 2019: The ethics of digitally recreated performances by actors who have passed away was questioned during an SMPTE panel at NAB. 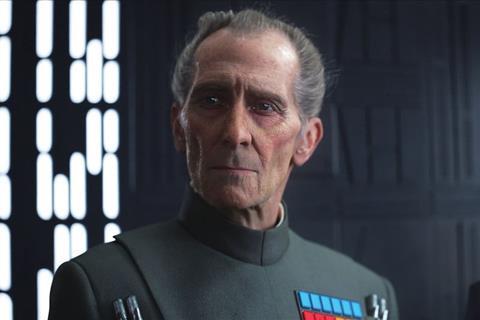 Rogue One: Tarkin brought back to life with VFX

In 2016, a dead man acted in a Star Wars film. Peter Cushing passed away in 1994 but a CG likeness of him was painstakingly recreated from individual frames to perform his scenes in Rogue One.

It is increasingly common today to scan important actors at various stages of the filmmaking process as an aid to VFX. It happens in TV with the lead cast of BBC and Amazon show Good Omens getting full photo scans.

“Digital technology is clearly coming to a point where photorealistic representation is possible and we must ask ourselves if we feel comfortable using likenesses of celebrities that passed away.” Arturo Morales, VFX artist

But what happens to these assets in case of an actor’s untimely death? Can they continue to perform posthumously? And who owns our digital likenesses? The studio or the actor and what happens if they become public domain?

These were some of the questions tackled by a SMPTE panel at NAB ‘Our Digital Selves in a Post-Reality Era’.

Of course, Peter Cushing was not the first. Oliver Reed, Paul Walker and more recently Carrie Fisher passed during filming and had their performance completed in CG. Go slightly further back and Audrey Hepburn and Gene Kelly were digitally resuscitated to ‘act’ in new commercials.

“Digital technology is clearly coming to a point where photorealistic representation is possible and we must ask ourselves if we feel comfortable using likenesses of celebrities that passed away,” says VFX artist Arturo Morales, who worked on Walker’s last posthumous appearance in Fast and Furious 7.

“I think that it is ethical as long as I can bring the digital actor on the same level of talent and if they are used in roles that follow the path of their career.”

Techniques for re-creating human performances are increasingly sophisticated. Lola VFX, for example digitally de-aged Samuel L Jackson by about 30 years in Captain Marvel. A stand-in actress was used as a body double in Bladerunner: 2049 onto which Sean Young’s face was overlaid. The same film also featured a holographic Elvis and Marilyn Monroe playing in a Las Vegas casino.

“We don’t just have the ability to volumetrically scan an actor’s face, body, movement but there are AI tools which can manipulate that ‘character’ independently of the actual performer,” explains cinematographer Andrew Shulkind.

In a world in which deep fakes are in many cases indistinguishable from the real thing, the ownership of our selves in a digital era isn’t just an issue for A list stars. We may all have an avatar in the 3D internet, so who protects that?