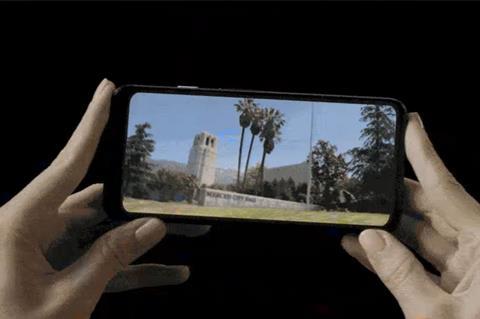 At CES this week, company founders Jeffrey Katzenberg and Meg Whitman delivered a keynote where they spoke about the type of content that will be available on the mobile entertainment platform as well as the technology that will deliver it.

As Quibi’s content will consist of scripted and unscripted series broken down into short chapters of around 7-10 minutes each made specifically for mobile viewing, the platform has introduced technology that it hopes will make for a more compelling viewing experience.

During the keynote, Katzenberg and Whitman debuted Turnstyle, a patent-pending technology that lets viewers keep the image full screen whether in landscape or portrait mode.

Content has been created with this feature in mind, with shots framed so that they work in either aspect ratio.

Whitman said the Quibi team had considered “how we could make your mobile moments extraordinary and delightful by thinking beyond screen and audio? How could interactivity of touchscreen, or a camera, or GPS affect the story? What would it be like to watch a thriller that knows what time it is? Or a scary story that knows if your lights are turned out?”

Quibi is regarded as having generous budgets and rights model which have helped it attract top directors and producers, including Steven Spielberg who is making After Dark, a horror series that will use the GPS functionality in a viewers’ mobile device to make sure they are only able to watch the programme between sundown and sunrise local time.

Whitman added that while creative teams are often not in the same room as technology teams “at Quibi we have upended this model and had integrated technology and creative conversations every day and that is what is driving innovation in stories and technology.”

While Quibi is often spoken of in the same bracket as streaming services such as Netflix, Amazon Prime and HBO Max, Whitman said in an interview with Engadget that because of its focus on short-form and mobile viewing she didn’t consider Quibi to be in competition with “big streaming services”.

She said: “Because actually, only 10% of Netflix’s viewing is on the phone. That’s largely a living room-based evening and weekend way to spend time. This is a different use case… we think we’re a third category of this on-the-go viewing opportunity that people will make room for in their entertainment budget, because it’s going to be great content for a mobile use-case.”

Quibi will initially launch in North America with two tiers of pricing: $4.99 with short ads, and $7.99 without them. In its first year, Quibi aims to deliver 7,000 pieces of content.