Red Bull is using biometric data to transform the viewer experience. Chief innovation officer Andreas Gall explains how, and explains why he thinks audio is so important. 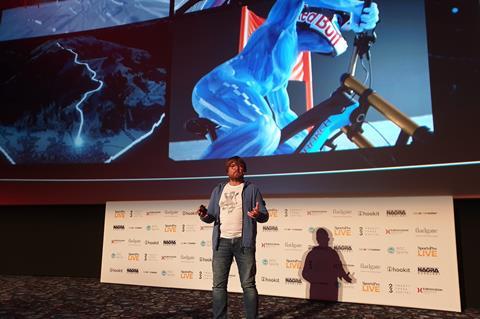 Biometric and performance data is being generated in increasing volumes through the digital transformation of sport.

This data is becoming increasingly visible through changes in the presentation of broadcast sport. It’s an area where the Innovation Lab at Red Bull Media House has been busy experimenting.

Andreas Gall, the organisation’s chief innovation officer, has learned there are dangers in visualising too much data on-screen and that there are other ways data can be exploited to engage the viewer emotionally.

Red Bull Media House is the award-winning, globally distributed multi-platform media company that promotes the eponymous energy drink brand through ‘beyond the ordinary’ stories - both direct-to-consumer and through partnerships.

The company produces and licenses a broad selection of live broadcast events and specialises in compelling and inspirational local storytelling around the world with original short and long-form programming as well as feature films.

Gall was speaking at SportsPro Live in London at the end of April. The event brings together sports federations, events, clubs, marketing agencies and other organisations involved in the commercial and sponsorship sides of modern sport with a focus on how sports and events themselves – including those that are rarely on traditional broadcast schedules - can use online and social media channels to increase engagement with existing fans and attract new.

At Red Bull since 2007 when he launched the drinks brand’s content arm, Gall talked about his team’s approach to innovation and the assessment of new camera, microphone and sensor technologies. “Jam sessions” are at the heart of the Innovation Lab’s processes: team members get together to discuss an idea, concept, or new piece of technology and start to build “what if” scenarios, develop and refine prototypes, and when they have identified value that they strongly believe in, bring it into the business.

Red Bull Media House represents the drinks business in 170 countries and Gall would love to bring his widely dispersed production colleagues together to jam but busy schedules, travel time and cost make this difficult. 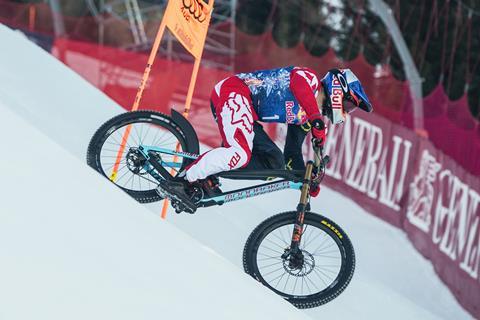 In January 2018, Red Bull were approached by Max Stöckl, an Austrian mountain bike rider who had long held an ambition to descend die Streif, the legendary Hahnenkamm downhill ski course at Kitzbühl in Austria on his bike. The 3.3 km course falls 860 m and is considered to be one of the most challenging downhill slopes in the skiing world.

The Innovation Lab relocated a planned jam session from its headquarters in Salzburg to Kitzbuhl so that the Red Bull production team could join in between sessions on the mountain.

Stöckl involved himself in the evenings. The result was that multiple sensors, cameras and microphones were fitted to Stöckl’s body and bike which enabled the Red Bull team managed to synchronise a variety of biometric and mechanical meta data with video and audio.

During multiple practice runs, Stöckl was consistently crashing at one particular point on the course. Analysis of the biometric data revealed that Stöckl was receiving a significant adrenalin push three seconds prior to the trouble spot on what appeared to be a (relatively) innocuous straight. “Three seconds before the crash, his body told him, ‘Hey! You will not make it!’ And Max didn’t care about this. He tried this ride several. Always at the same point, he crashed,” said Gall.

”Because technology isn’t a problem… we can demand the highest levels of accuracy.” Andreas Gall, Red Bull

On the sixth attempt, Stöckl succeeded, and reached a top speed of 106 kmh. Asked what was different, he responded, “I listened to my gut.”

Gall says that his part in this project has changed a lot within his department – and in other departments in the organisation. “Because we know a lot from our sports people, we strongly believe in the sixth sense – gut feeling.”

One operational change has been that gadgets and equipment are packed into travel cases so that the Innovation Lab can meet with production teams on the road rather than at its headquarters.

Gall is a big believer in collecting metadata. However he is adamant that when using data it needs to be 100% accurate. He decries the kind of “fake information or algorithm work-arounds” that were brought to light through the German car emissions testing scandal.

“I think it’s time now - because technology isn’t a problem anymore - that we can demand highest accuracy.”

During the week working with Max Stöckl, the Lab developed a prototype that combined GPS and speed data with video: when a specific location on the map was selected, the video would jump directly to the relevant frames and speed data.

What the team identified during the testing week was that civilian GPS is not accurate. “We detected the deviations up to 38m,” said Stöckl. On a steep mountainside, 38m can be a dangerous discrepancy.

Previously, in 2014, Gall had visited a young start-up at the Technical University of Munich. They showed him a centimeter accurate tracking system. Red Bull supported the start-up and helped them bring their technology into the sport business. “So what we did, as is our daily business, we ‘gave wings’ to the concept,” and asked them if they were ready to evaluate their technology by testing it with Red Bull athletes and sport events.

Tests with Luc Ackerman, a German freestyle motocross rider, quickly revealed that the data produced opened up a wealth of new visualisation options and inspired a hoard of ideas. “With this information you can do a lot of nice graphics,” said Gall.

One larger trial involved using the system, which involves installing a dedicated radio transmitter network as well as body-worn sensors, for ski analysis at Kirchberg, near Kitzbuhl. Sensors were worn by a “young wild”, one of the interns that are placed with Red Bull Media House teams around the world, which allowed accurate comparisons of a series of slalom runs.

The system has applications in real-time coaching and technical analysis as well as providing a foundation for artificial reality applications. Red Bull’s broadcast teams are working with its digital department to develop second screen applications.

Kinexon, the company that grew out of that Technical University of Munich start-up has gone on to work with federations and teams in soccer, basketball, handball, beach volleyball and ice hockey and its technology has been used by broadcasters and betting companies.

“You feel what you hear…my recommendation is to re-activate the audio – the hearing sense.” Andreas Gall, Red Bull

But the ability to do more visualisations doesn’t always mean that giving the viewer more visual information is the right thing to do.

The Innovation Lab put sensors on a freestyle motocross rider to read his heart beat. The first visualisation offered the viewer video from the perspective of the rider overlaid with speed and heart rate data.

Gall found that viewers were confused: they didn’t know where to focus their attention: on the video, the speedometer or the heart rate. In another trial, they included g-force, heart rate and stress level. Again, the feedback from viewers was that while it was nice to have the data, they didn’t really know what to look at.

“One of my young wilds translated the heart rate information to audio which allowed the viewers to hear the heart beat.” The heart rate, which reached a peak of 220 beats per minute, gave the viewers a visceral connection to the content. 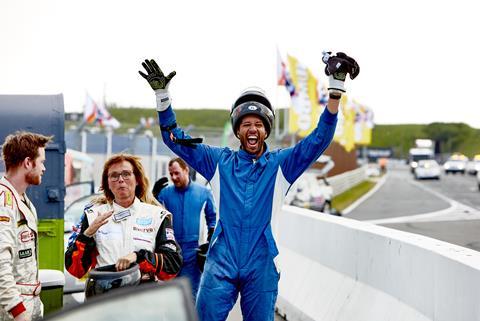 Formula 1: ”Red Bull works with love to share their emotions”

“You feel what you hear,” said Gall. “In recent years we have concentrated too much on visualisations. My recommendation is to re-activate the audio – the hearing sense.” He also observes that as today so many people use headphones or earplugs, it’s now possible to bring the best quality audio to the ears of our users.”

The team are now experimenting by mounting microphones on motor bikes and other motorised vehicles to give viewers the chance to feel how engine noise varies as loads and stresses change.

An initial test on board a Red Bull sponsored helicopter flown by a world champion stunt pilot revealed the camera didn’t handle the vibrations well. The start-up went away and came back a fortnight later with an update which was tested aboard Red Bull Air Race planes.

“They did their homework. No vibrations. We gave wings to each other. We can use the camera now in our extreme sports business. We are happy. They are happy,” said Gall.

The footage generated through the trial helped the start-up bring investors on board. “We give wings with our time, knowhow and ecosystem. Usually it’s not about money but how we integrate them in our daily business. My job is to discover the coolest ‘guts’ in the world - the digital explorers, the digital adventurers!”

That’s why Gall is convinced he has the best job in the world.