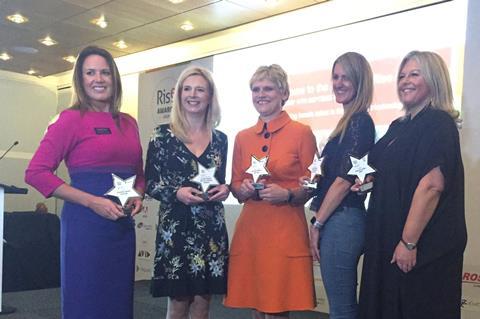 Rise was formed in 2017 to support and promote women working in the non-craft part of the broadcast industry in operations, engineering, sales, marketing and business.

The judges saw over 100 nominations of women in a variety of roles from around the world, with the gongs selected across six categories.

The ceremony saw Morwen Williams, head of UK operations, BBC News presented with the Woman of The Year Award. Williams was picked for the award by the Rise Advisory Board, who credited her for having a key year in the industry. She was promoted to head of UK operations at the BBC and appointed chair of the World’s Broadcasting Union’s International Media Connectivity Group. In addition, she has been chosen to complete an Executive Education programme at Harvard University on Media Transformation Challenge.

The Rise Advisory Board said: She has relentless positivity and enthusiasm and is a fantastic role model across the sector. Although she is incredibly busy, she continues to take the time to be involved in the Rise mentoring programme and has been a superb mentor for the last two years.”

The other winners of the 2019 Rise Awards were:

Separately, Rise announced a collaboration with BT Sport, Sky and other industry partners to launch ‘Rise-Up’, a new industry-led schools outreach programme aiming to inspire and educate children about engineering and technology opportunities in the broadcast, media, and entertainment industries.