The RTS Programme Awards honours excellence across all genres of television programming and recognises exceptional actors, presenters, writers and production teams as well as the programmes themselves.

Alex Mahon, who spoke at IBC2016, CEO of The Foundry chaired the awards ceremony, honouring Julie Walters for her outstanding work in film and television with The Lifetime Achievement Award.

The BBC won 13 awards across the categories, including the new RTS Channel of the Year Award for the newly introduced online only channel, BBC Three. Taking home two awards was BBC’s Phoebe Waller-Bridge having received the Breakthrough Award as well as the Best Comedy Writer for Fleabag. The Comedy Performance Award went to Asim Chaudhry for his role in People Just Do Nothing which also won the award for Scripted Comedy. Murdered By My Father won the Single Drama award.

Winning female actor award for her performance in Undercover was Sophie Okonedo. Happy Valley was awarded Drama Series title, with the show’s writer Sally Wainwright winning the coveted Writer – Drama award. Wainwright was acknowledged for her contribution to the industry receiving the Judges’ Award for being a writer of outstanding distinction.

“It has been an outstanding year of broadcasting. I would like to congratulate all of the winners – it is your talent and brilliant work which makes British television excel on a global scale” – Alex Mahon

Daytime programme was awarded to Find It, Fix It, Flog It, whilst the award for Live Event went to Stand Up to Cancer. The award for Sports Programme went to Rio Paralympics, and First Contact Lost Tribe of the Amazon won the award for Science and Natural History. 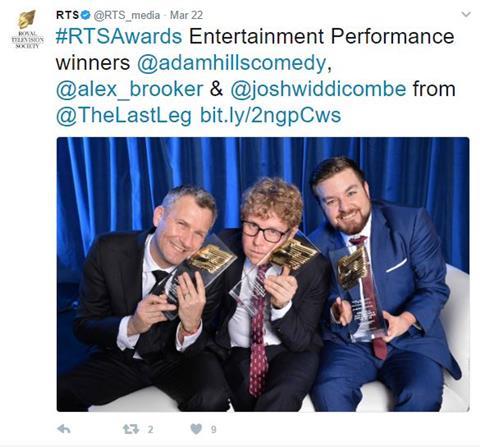 Ant and Dec’s Saturday Night Takeaway won the Entertainment category for ITV; whilst Emmerdale won the award for Soap and Continuing Drama, for the second year running.

• Daytime programme: Find it, Fix it, Flog it

• Live Event – Stand Up to Cancer

• Popular factual and features – Employable Me

• Channel of the Year: BBC Three

• Scripted comedy: People Just Do Nothing

• Single drama: Murdered By My Father