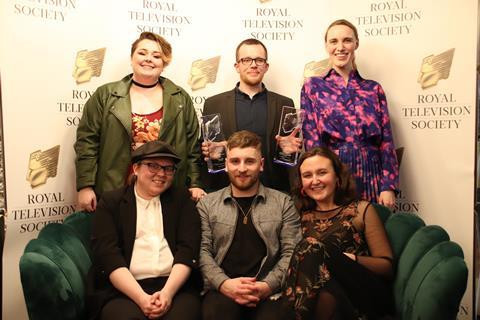 The Awards, sponsored by STV, were unveiled at a glittering ceremony held at The Everyman Cinema, Princes Square, Glasgow. The event was hosted by STV Entertainment Reporter Laura Boyd.

The University of Edinburgh led the way on the night, taking home four awards, with The Royal Conservatoire of Scotland following with two wins, retaining the gong for both Drama and Writing for a second year running.

James Wilson, chair of RTS Scotland Student Television Awards said: “Our industry depends upon the development of young people, their skill growing with their confidence under the guidance of their tutors and mentors. This year’s programmes are as strong as ever and decisions were long argued and often very close. Every nominated team and individual should be proud of their achievement.”

Simon Pitts, CEO of STV: “Scotland is brimming with exciting creative talent and STV is very proud to be sponsoring the RTS Scotland Student Television Awards again this year. As last year all the nominees will be offered a platform to showcase their fantastic programmes on the STV Player, where 4/5ths of the Scottish population are already registered users.

“Highlights of the awards ceremony will also be available on the STV Player and beyond that STV will be offering mentoring to the winners as they start their journey in this exciting and vibrant industry.”

All nominated and winning films will be available on STV Player from 12th February 2020.

Please see below the full list of nominations and winners:

“We Three” - Will Peppercorn, George Harwood and Grace Dickson (University of Edinburgh)

WINNER – Adam and the Alphas – Murray Leitch (University of Stirling)