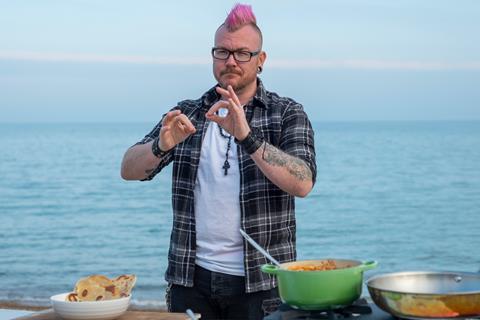 Punk Chef on the Road: One of BSL shows available at launch

Sky has added a new BSLZone onto its Sky Q and Sky+ platforms, with around 100 episodes of content in BSL made available at launch.

It will span comedy, drama and factual content, and will be offered as part of Sky’s Entertainment packages for no extra cost. Programmes announced include To Know Him, Deaf Funny and Up for it.

BSLBT is an organisation that offers commercial broadcasters an alternative way to meet their regulatory requirements to provide sign language on their channels. It was set up by UK regulator Ofcom and is now in its 10th year.

Independent broadcasters with between 0.5% and 1% of audience share can choose either to source and broadcast programmes presented in sign-language themselves or to pay an annual subscription fee, set by Ofcom, to BSLBT.

“The programming that BSLBT commissions celebrate deaf culture in the UK and showcases deaf talent both in front of and behind the camera,” said BSLBT programme manager Sam Calder-Bray, in a video released by Sky. “Sky has support BSLBT since its creation.”

Jamie Morris, director of programme strategy, entertainment, at Sky, added: “This is about making the very best content available to all of our customers, making sure we really do provide something for everyone. We’re a really big supporter of BSLBT and all the work they do.”