Red’s announcement that it would launch a phone with a holographic display early next year prompted many questions about the device’s underlying technology. Phil Rhodes looks at what might be contained within. 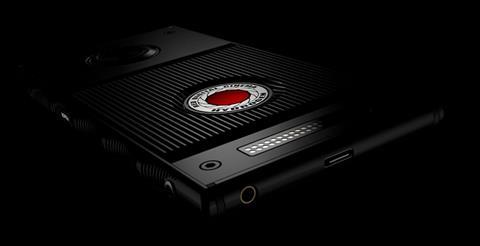 Red Digital Cinema revealed it was entering the smartphone market when it announced the Hydrogen One back in July.

In keeping with Red’s stated aim of being an industry disruptor, the company claimed that “with one fell swoop…the future of personal communication, information gathering, holographic multi-view, 2D, 3D, AR/VR/MR and image capture just changed forever”.

The Android OS device, which has an expected shipping date of Q1 2018, has been positioned as the first component of “an ever expanding modular component system” which will also integrate with Red’s camera range as a user interface and monitor. Most interestingly, it also includes a 5.7-inch “professional hydrogen holographic display”.

A handful of reviewers have been able to view a prototype built with final materials and dimensions, but without the holographic display. For that, a second unit was supplied with a working display, but those who have posted video reviews were not allowed to show it, leaving many to ponder how it will work and the technology it will be based on.

We can assume that the phone will have a display we might call autostereoscopic, inasmuch as it should be capable of displaying images which appear three-dimensional without the observer being required to wear glasses.

Beyond that, Red founder Jim Jannard has commented that the display is a “four-view” type.

The term “four-view” has only really been used to describe displays with rather limited capabilities, so it’s presumably a reference to the fact that traditional stereoscopic displays work only when the viewer’s eyes are separated in the same (invariably horizontal) plane as the separation between the two images. This is an issue with existing pocket 3D displays such as the the Nintendo 3Ds, which doesn’t work in portrait orientation. Jannard’s comment suggests that the Hydrogen display should avoid that limitation.

This conclusion is supported by the sparse information floating around the internet about the display technology from Leia Inc., and is reportedly based on research originally done for HP.

Significantly, a couple of months after the initial announcement about the Hydrogen One Red revealed that it had entered into a “long-term exclusive partnership” with Leia for the company’s proprietary lightfield display technology and software. Red has also made a strategic investment in Leia and Jannard has joined the Leia board of directors.

A 2012 Nature paper (“A Multi-Directional Backlight For A Wide-Angle, Glasses-Free Three-Dimensional Display” by David Fattal, Zhen Peng and others), as well as a piece published by the MIT Technology Review in 2013 (“New 3-D Display Could Let Phones and Tablets Produce Holograms”), have been linked to Leia and, by implication, the Red phone.

The tech discussed in these pieces is quite original; it was, after all, considered sufficiently novel to be published in Nature, which is not often a venue for what we might call commercially-oriented work.

The patterning involved is done “at the nanoscale” and apparently provides fine enough control to allow light to be emitted at one of dozens or hundreds of different angles, then passed through a conventional LCD display to form an image.

Do that with a large enough number of pixels and it becomes possible to display an image that’s only visible from one angle. Change images on the LCD and change the backlight angle, and a different image is visible from another angle. Use appropriate images and lots of angles, and the result is a display that looks like a three-dimensional object which we can move around and view from different angles. 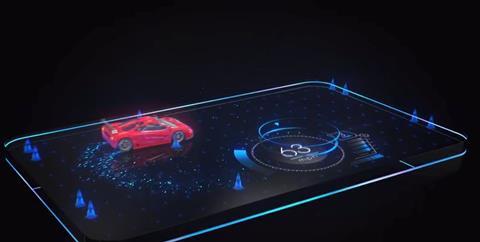 It probably isn’t quite accurate to call this holography, still, but it should overcome many of the issues of lenticular or parallax barrier displays. These technologies use either tiny lenses or a patterned mask to ensure that each of two human eyes only sees a certain group of pixels on a display, based on their slightly different positions. These approaches rely on the eyes and display being in the right orientation, and the number of different images tends to be quite limited.

The result is a stepping effect as the point of view changes. The Leia display will likely suffer this to some extent, as it’s still dependent on showing different images at different angles, although the notes suggest that a few years ago they’d achieved 64 images on video, and thus 64 different possible angles of view, and 200 images on stills.

There are some practicality issues. First, a display showing 64 views of something requires 64 times the amount of data of an equivalent 2D display, and it’s possible that the number of views has increased, since 64 views distributed equally into a square display would only give eight horizontal and vertical positions, leading to visible step changes as an observer moves around.

It’s likely that adjacent views of the same object would have some redundant information – that is, detail that could be compressed out, in the same way we use the similarities between adjacent frames in conventional video to perform compression online and on blu-ray discs. This sort of compression engineering may be part of Red’s new work.

Comparisons to the Moto Z and its Moto Mods expansion devices are inevitable – even the pattern of gold contacts on the back of the handset are reminiscent of Motorola’s design. Even more granular ideas of a modular smartphone date back at least to the Phonebloks concept, originated by Dutch designer Dave Hakkens, in 2013, though both the Moto Z and Red’s thinking seems more focussed on bolt-on modules.

Perhaps one of the most interesting questions is why Red might have chosen to enter the smartphone market, something about which we can only guess.

Rental house Brownian Motion is no stranger to Red’s output, holding significant stock of the firm’s cameras. Chief executive Jeff Brown suspects that that the cellphone may just be the start. “It may be in the form factor of phone, because that’s what everyone’s got in their pocket…I might talk on my phone for five minutes a day but I use my phone for an hour a day… I can see them making the phone, the phone has an impact, and then Red sells [the technology] on to car manufacturers for sat nav, to TV manufacturers… I think they’ll be making the technology that’ll be on display in a phone that makes everyone sit up and take notice.”

From a sales perspective, Ivailo Velinov, technical consultant at UK-based reseller CVP, feels that it will revolutionise the mobile market. He says: “There’s little or no information about the display, but I trust Red to reiterate what they did with the original Red One.”

For Velinov, the integration with Red’s existing camera ecosystem is key. But he says “the question is what content will be available for it and what kind of software will allow you to create files like this? Will you be able to stream videos on YouTube or Facebook… or will you be restricted in doing it, as with the old iPod where you download [content] with your computer and transfer it with a cable… people are bored of this; they’re on the train, they want go on 4G and download.”

This thought brings us full circle, back to consideration of the way the display is implemented and the data it will need to work well. Ultimately, none of these questions can be answered until both the phone and the software required to prepare material for its interesting display are available.