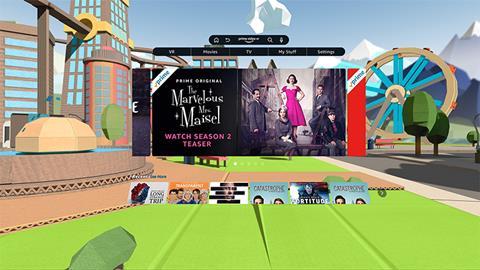 Prime members in the US and the UK can grab a seat in their own personal theatre to watch Prime Video Original movies Amazon Prime Video content is also available by voice search programming.

In a statement, Oculus said: “Emmy-nominated short film Invasion”, and Greenland Melting, an “immersive documentary from Nova and Frontline that explores the effects of climate change on the Arctic island of Greenland,” will be available to consumers.

The library also Including Oscar-nominated Cold War, Guava Island, and Chasing Happiness, as well as Emmy-winning, shows including The Marvelous Mrs. Maisel, Tom Clancy’s Jack Ryan and Fleabag, among many other titles.

The company said: “VR lets anyone enjoy their favourite movies and TV shows in the privacy of their own virtual theatre or living room, and now there’s even more to watch with Prime Video VR from Amazon.

“Packed with all of your favourite programming from Amazon Prime Video, including a curated selection of 360° videos, Prime Video VR is available now on Oculus Quest, Oculus Go, and Gear VR.”

Amazon has also announced that users will be able to immerse themselves in 360-degree videos – although, for the moment, there are only 10 titles to choose from, and exclusive to Prime members only.

Earlier this year Amazon announced Virgin Media is to be the first of Liberty Global’s European operations to offer Amazon Prime Video via its set-top box.