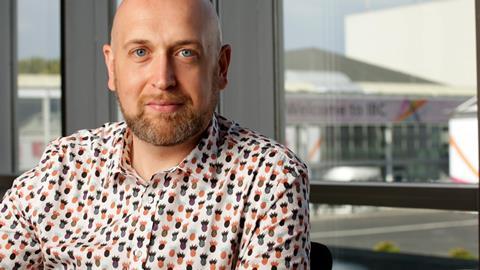 Despite the light-hearted company name of Space Beers, co-founder Maurice Schutte is very serious about filmmaking and utilising blockchain to help him do so. IBC365 spoke to Schutte to discover more…

Maurice Schutte has been a TV and film producer for over a decade but his current project is creating what he dubs, ‘”the Space Beers universe”. The company, soon to be renamed Space Beers Adventures, came out of a meeting Schutte had with screenwriter Philip M. Howe at the Cannes Film Festival. 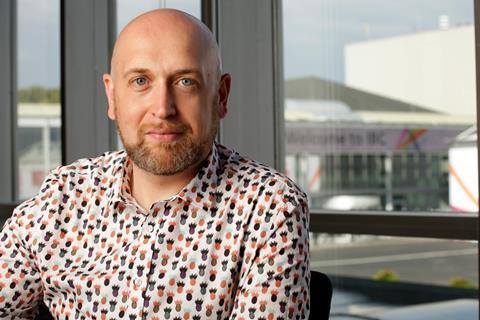 Schutte reveals, “He [Howe] was shopping his film ideas around on a big, letter-sized flyers but you have to fold them to take them with you, so it’s not really an ideal way to get people interested in your film ideas. So we joked about it and thought ‘well, maybe we should just print your film synopsis on the back of a beer bottle. Everybody wants a beer; so that’s where it all started. It’s kind of escalated from that point on and we found our sci-fi universe in there and we have been working on that ever since.”

“But we are just getting started. After that we are looking into other spin-offs. We have been working on this universe for two years and we have some ideas to spin it off into other media, outlets and other things. It can be animation, TV, a card game, you name it. We are really building on the brand – we introduced things like beers – but the main focus is the live action film.”

Yet, despite the relative levity of the company name and sci-fi projects Schutte is deadly serious about business and technology. As Space Beers is based in Amsterdam he is a habitual visitor to IBC. “Because I have a technical background I’m always keen to know what is going on.

”I like to know what the new developments are in software, camera equipment and lenses – the new toys. When you’re talking with your DoP and you’re trying to figure out what kind of camera and lenses you’re going to choose it helps to know and understand what the differences are and what everything brings to the table. It starts with the camera body and the lenses – these have a really big impact on the look and feel of your film.”

The blockchain path
Schutte’s technological journey has led him to explore the possibilities of using blockchain technology for his company’s filmmaking purposes. That led Space Beers to the blockchain applications being offered by the US company SingularDTV, which has deep roots in the creative and filmmaking industries.

What is blockchain?
As blockchain is a relatively new technology – which has primarily been used for crypto-currency thus far – many people may still struggle to unpack exactly what blockchain is and how it can benefit the film and other creative industries.

Put simply, it’s a secure and transparent database system that allows users to add ‘blocks’ of information that link to form an irreversible time-stamped chain of information. The blocks are encrypted so, for example, everyone in a film production company can have access to them but a single user can have an encryption key to ensure that only they can add a new record and ensure no-one else can manipulate it.

He reveals, “Last autumn we started to talk to SingularDTV about their products and their platform. As film producers we are actively using their current tools and are looking forward to the new tools that are still in development, including their distribution platform.

”We decided to go this route because we found our solution in blockchain. By using the tools provided by SingularDTV we were able to tokenise our film project and brand.”

Benefits of blockchain
As just mentioned one of the first applications of blockchain that Space Beers used was to tokenise its movie project – it did so via SingularDTV’s Tokit application. Schutte explains, “We successfully launched a crowdfunding campaign – a unique thing that really enabled us to develop the [Space Beers] movie. We are very enthusiastic about what we’ve solved with it [blockchain] and what it has brought to us – that’s something that really transpires in our stories when we are talking about it.”

He expands, “The reason we chose to tokenise our film project using blockchain came about because we were getting into the phase where we had to get the rights management loud and clear for ourselves. We had to take down and record everything as to how much of a percentage was going to the writer, the producer etc.

”Normally this creates all kinds of paperwork and we are a production team that is really keen on using new technologies, so we had started thinking about new ways of how we could do it. Then we found SingularDTV, which enabled us to tokenise it [Space Beers] and have the rights management in a new way that was controlled and accessible for everybody that was involved.”

Schutte describes the use of blockchain and Tokit as having the “biggest impact” on his business in two ways. First off, obviously, it raised money for development of the Space Beers film project but it has another key benefit. Schutte reveals.

“It also enabled us to get on stages, get excited, talk about the project and talk about the technology in general. This really helps in the development of the film because it is an indie film project, so when you’re talking about it as much as possible it really opens doors and gets you a bigger network [of contacts]. By far it [blockchain] has had the biggest impact for us.”

He adds, “One of the hardest things as an indie filmmaker is to get the funds in place, to own your own IP and to control it as much as possible. New tools are enabling us to do so, which is a really good development. Sure, you’ll always be looking for the funding and to get your film made, but getting the funds in place is always a hurdle. The use of blockchain really does enable new methods to realize that goal and to get going.”

‘We are a production team that is really keen on using new technologies, so we had started thinking about new ways of how we could do it’

Talking and documenting
Schutte is very much an evangelist about getting up and talking about his projects and how blockchain has helped his company and he notes, “Nobody knows you are working on something unless you talk about it. So, use every technology out there; use social media to talk about it, build and audience and build on that… it really has a big impact.”

Space Beers has taken that discussion one step further and has employed an external documentary team to document its production unit’s journey into blockchain. They are filming the process to document the benefits of using blockchain, the hurdles, any new problems encountered, the required ‘fixes’ and how Space Beers is one of the pioneering, early adopting film companies in the blockchain space. The aim is to have the documentary ready to screen at the Imagine Film Festival in Amsterdam in April 2019.

Schutte wraps up our discussion with an anecdote that perhaps tells more about the rise of blockchain than anything else. “I was at the Fantasia Film Festival in Montreal recently and we bumped into the producer of the Atari Movie [J.D. Seraphine].

”It was really interesting because this is a $40 million Hollywood movie and they also used blockchain to raise their budget. They developed and launched their own platform, tokens and all those kind of things and it was interesting to hear the producer talk about the process. Multi-million dollar productions are also looking into this, so that’s very interesting.

”The fun thing is we are all pioneering and discovering this new technology. We are all just getting started. These are exciting times for both new and established filmmakers.”