An IBC panel was unanimous about the impact IP was making – and would continue to make – to broadcasting. But as Richard Lindsay-Davies (CEO, DTG) warned: “Whatever we do, we must put the viewer first.” 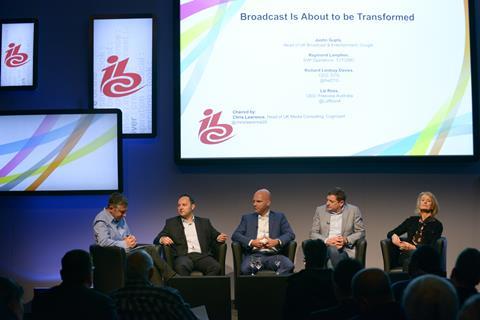 The DTG is about to publish a Green Paper summarising its recent research and analysis, but he said the report could be distilled down to three core elements: taking the best of our existing system, always protecting younger viewers, and keeping everything affordable.

Justin Gupta, ex-BBC and now Google’s head of broadcast & entertainment, said IP is changing everything, and the viewer benefits. He said that some former very niche topics, such as eSports, had been brought to life by YouTube and were now mainstream, thanks to IP.

Liz Ross, CEO at Freeview in Australia, warned that their own research showed that viewers don’t like multiple “coloured buttons” and she was anxious about menu-driven options. “Don’t design a system for youngsters. They’ll get it anyway.

“Design for older viewers, in the mass-market and elderly.” She was also concerned about any IP-based broadcast system that went to rural and countryside locations where fibre would never be available.

Raymond Lamphen, GM/VP at DMC, echoed that thought and said the technology is not the problem. “Where’s the business model [for some services]? Life is harder over IP and linear TV is still the most valuable sector in broadcasting.”

Lindsay-Davies welcomed the extra viewer choices available, but cautioned that ‘transmissions’ had to scale, and technology had to work. “We have a major test suite in London and engineers are sometimes brought to near tears trying to get their technology running.

“I fear that we may not be on a gentle flight-path, but fast approaching a cliff edge. And where’s the bandwidth? How do we overcome capped data rates? I don’t think we have all the answers.”