The Light Storm 300x is Aputure’s latest point-source LED and is described by the company as the first bi-colour Bowens mount light fixture to be compatible with optical lens modifiers. 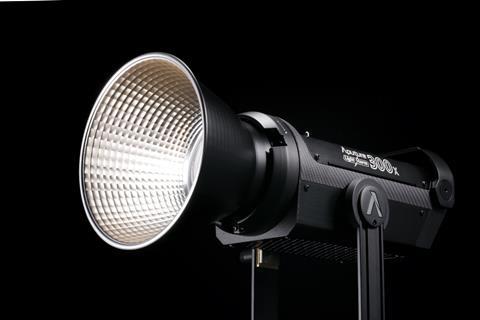 Combining the latest optical colour blending technology with Aputure’s dual-colour LED chipset, the LS 300x can utilise the Fresnel 2X and Spotlight Mount for optimum flexibility from a single fixture. With a simple dial-turn or press of a button, the fixture’s white light output can be adjusted between 2700K-6500K in seconds, making it possible to achieve light that is warmer than typical tungsten fixtures and cooler than conventional daylight (D55).

Also included in the 300x are a full 360-degree adjustable handbrake locking yoke and a passively-cooled, all-in-one control integrating power supply and control system into a single unit. This product also utilises a new CCT control wheel, in addition to the intensity wheel, allowing users to fine-tune their CCT in plus or minus 50K increments. With the Preset button situated in the middle of the wheel, it is also possible to toggle between five common CCT presets (2700K, 3200K, 4300K, 5500K, 6500K) for quick accessibility.

The 300x features two output modes – Max Output and Constant Output. In Constant Output mode, the user can change the CCT precisely while maintaining a consistent luminance level. Combined with a new, smoother dimming system, it is also possible to seamlessly shift the colour temperature in the middle of a scene. Meanwhile, in Max Output mode, the 300x will maximise the output for the required CCT and dimming level, with the highest output range being 4000K-5500K.

Maintaining the Light Storm range focus on flexibility, the 300x is compatible with a number of control methods. In addition to the control wheels, the 300x can be controlled using Aputure’s 2.4G RF Remote, DMX512, and the Bluetooth Mesh Sidus Link App. The 300x also facilitates control through several channels, making it possible to precisely fine-tune lighting setups.

The 300x also launches with nine built-in lighting effects, including Paparazzi, Fireworks, Lightning, Faulty Bulk, TV, Pulsing, Strobe, Explosion and Fire – all of which have adjustable colour temperature. According to Aputure, the 300x’s capabilities will continue to grow with firmware upgrades to both the fixture and the Sidus Link ecosystem in the future.