”May you live in interesting times”, as the popular saying (or ancient curse, depending on your interpretation) goes, and certainly 2023 is set to be very interesting indeed. From the global financial outlook and its repercussions, to the accelerating pace of technological change, there’s plenty ahead to give food for thought, whether you’re on the side of pessimism or optimism. Welcome to a selection of highlights to expect from 2023…

Financial outlook set to be mixed

With a recession on the cards for much of Europe, the ongoing war in Ukraine and strong bets on recession in the US and China (according to the head of the IMF), it’s fair to say the economic outlook for 2023 is mixed at best. 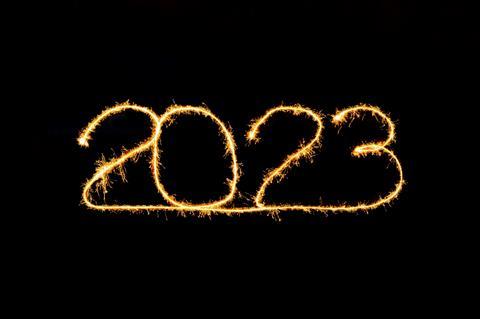 Coupled with rising inflation and a destabilised property market, the UK in particular is set for a rough ride. How much this will impact tech, media and entertainment is anyone’s guess - the received wisdom is a tightening of consumer belts to compensate, and lowered investor confidence in general, but that’s not necessarily the case for all players.

There’s likely to be continued fallout in the tech sector from the mass-layoffs made by companies like Meta and Amazon in late 2022 to reduce costs, and the torrid combination of Musk, Twitter and Tesla will certainly generate more column inches. In December 2022 Tesla’s stock had dropped 73% after a record high in November 2021, while Apple shares hit their lowest point since June 2021, thanks to supply chain concerns - something that will undoubtedly continue to have wider impact.

That said, China’s aim to lift quarantine rules for travellers in early January may well herald a return to smoother production and a lessening of the interruptions that have caused many a headache post-pandemic.

Rise in AVOD and FAST set to continue

One generally agreed result of this instability is disruption to the SVOD market, as consumers cancel or don’t renew duplicate SVOD subscriptions.

The result of this may well be success for some FAST and AVOD players, able to attract valuable eyeballs and successfully monetise them in a period where consumer spend will be increasingly tough to attract for advertisers. Whether this will necessarily see success for direct-style retail models - and many flavours of hybrid model - remains to be seen, but it seems likely experimentation will bring dividends.

A recent report from UK market analyst firm Digital TV Research predicted that the revenue growth rate from advertising-supported video on demand will exceed that of subscription video on demand over the next five years. The report predicted that AVOD revenues from movies and TV series will reach $91 billion by 2028, up by $52 billion from $38 billion in 2022. SVOD revenues will climb by $29 billion between 2022 and 2028 to $132 billion.

Paolo Pescatore, Founder & TMT Analyst at PP Foresight added some key insight: “Certainly the cost-of-living crisis will impact users’ willingness to sign up or continue paying for a subscription that is no longer seen as essential. Prices are all heading in the wrong direction; with consumers all feeling the pinch and tightening their belts, which will slow growth. All streamers are at a different phase of growth - Netflix is the benchmark and Disney+ is still in stealth mode, but other pretenders will struggle.

“Adding an ad tier is the strategy that will help streamers to diversify their business models further, offering something for everyone which should resonate with a broad range of users.”

Sporting rights to be a key battleground

Pescatore continued: “During a recessionary environment, many users and households alike will tighten their belts, which in turn will drive users to find alternative ways to watch and stream illegally. This will represent a huge worry for the industry over the next year, and even more so with further fragmentation in the sports landscape.

The new BT Sport and Discovery UK joint venture will struggle to find its feet, in contrast to the Apple and Major League Soccer 10-year deal, which seems like a pivotal moment and ushers in a new era of sports rights and opportunities for streaming. All sports associations/leagues will be looking at this deal very closely and weighing opportunities to connect with new audiences. Sports clearly represents the next battleground for ownership of the living room among the big tech companies, as it drives users to watch TV live and (in this case) allows Apple to tap into a lucrative ad space for the company.”

Very much setting the tech market pace for 2023 will be the Consumer Electronics Show (CES) in Las Vegas (Jan 5-8), this year especially so after several years of pandemic disruption. The 2023 lineup is set to showcase VR and the Metaverse in particular, although new TV panel technologies and lashings of 8K will also take centre stage. A key area of interest will be around new VR headsets, with both Sony’s PSVR 2 and Meta’s Quest Pro due to take starring roles.

CES will be followed by ISE, the AV and systems integration exhibition at the end of January, which will be keynoted by BK Johannessen, Unreal Engine Business Director for Broadcast and Live Events at Epic Games. Titled ‘All Paths Lead to Real-Time’, Johannessen will discuss how content creators are taking innovations from the games industry and applying them to their projects, from cutting-edge, broadcast virtual production studios to real-time graphics for media & entertainment, live events and more. ISE will run from the 31 Jan - 3 Feb https://www.iseurope.org/welcome.

Of course, later on in 2023 will see the return of IBC2023 to the RAI in Amsterdam, on the 15-18 September. Stand space at IBC2023 is in heavy demand and the show footprint has been expanded to include an additional hall. IBC2022 saw 37,071 attendees from over 170 countries arrive onsite at the RAI to engage with more than 1000+ exhibitors showcasing innovation and cutting-edge technology.

In a recent retrospective of the IBC2022 show and look forward into 2023 at the IET, Jonathan Chappell-Seetayah, IP Broadcast Project Engineer and RTS Young Technologist of the Year 2022 shared his belief that linear and streaming consumer behaviour would continue to consolidate through 2023.

“It won’t just be providing video on demand services, it will provide all of that plus the live stuff as well. And [also] use machine learning, and everything else that has been adopted over the years, to provide the content you’re going to like.”

Certainly the utility of AI in broadcast contexts such as speech-to-text use cases, content localisation and metadata creation is rapidly improving, and 2023 has plenty more of this in store.

One of the major signposts for this will be the release of GPT-4, the next generation of OpenAI’s generative language model. Rumoured to be scheduled for ‘early 2023’, the new model will undoubtedly be more powerful than the previous iteration, highly likely to have been trained on a much larger dataset than before (OpenAI’s GPT-3 is 175 billion parameters in size) and will have a profound influence on the accuracy and speed possible.

There’s been much talk around 5G in broadcast and the potential opportunities around the new technology, but the increasing traction of the standalone (SA) version of 5G should begin to approach critical mass in 2023. Achieving ‘critical mass’ around 5G SA deployment will enable a range of enhanced network services to become viable in the real world, such as network slicing.

The Global mobile Suppliers Association (GSA) indicated in a late 2022 market report that 111 operators in 52 countries and territories worldwide have now invested in public 5G SA networks in the form of trials, or planned and actual deployments. In parallel, analyst firm Deloitte has predicted that the number of MNOs investing in 5G SA networks will double from more than 100 operators in 2022 to at least 200 by the end of 2023.

Pescatore agreed: “I fully expect 5G to play an increasing role for contribution, production, delivery and consumption. This will grow in tandem as rollout of the technology proliferates combined with solutions around network slicing.”