With more than a week of coverage, the BBC’s annual visit to the Royal Horticultural Society’s Chelsea Flower Show is one of the biggest non-sporting outside broadcasts of the year.

This year it was unusual not just for having to deal with the routine consequences of Covid, but also that it was in September, having been postponed from May 2020, making it something of a horticultural treat for viewers but a nightmare for garden designers who had to tear up their planting plans. 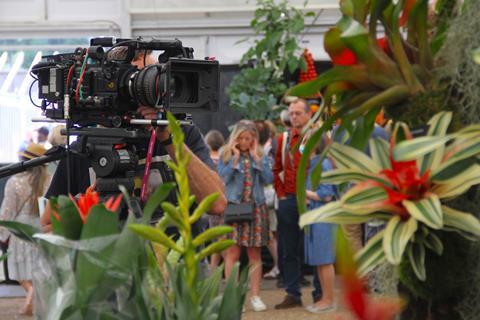 “The way the programme is done is quite unusual because all through the day it feels like it’s a live programme, but it’s not, it’s really a recorded programme; it’s all compiled ENG, just that the ENG are operating live,” said Simon Fell, unit manager and RF project manager, Timeline Television – which handled the OB for the BBC.

“The seven live cameras are really ENG cameras and the material is all recorded into EVS back at the scanner.” Although much of it is shot as live, only very few elements are actually broadcast live, partly because it would be difficult to move crews and equipment around the crowded site during a programme.

The production used seven multicam cameras, shooting and recording as live “then the edit afterwards to tighten them up, dropping in pictures of various flowers and anything else of interest,” said Martin Sexton, outside broadcast unit manager, Timeline Television. 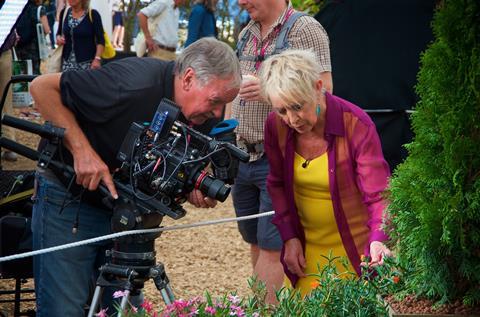 “All the [multicam] cameras are live, so they’re all on RF. You can’t cable around the showgrounds. There’s too many people in the way,” said Sexton.

This was Timeline’s third year of a four-year contract, so there wasn’t much change technically this year.

“It’s generally settled down and working well” with only a few tweaks to the production. For example, “this year’s the first year we’re using all rechargeable batteries everywhere,” said Sexton.

Typically they would have used 800 AA batteries to power microphones, intercoms and other small pieces of kit, and have moved completely to rechargeable batteries that just go back into the system. “So, we’re hoping that has all improved the environmental impact.”

That was a Timeline initiative, but obviously the BBC supports it. “There used to be buckets of AA batteries thrown away at the end of the show, which there now aren’t,” added Fell.

As a company Timeline hasn’t used any single-use plastic for quite a while, and only uses renewable energy, although it wasn’t responsible for on-site power at Chelsea.

The biggest change this year has, of course, been Covid, which “has changed the production from a visual point of view. The presenters have to be a lot further apart,” said Sexton.

“But, from a technical point of view, it hasn’t really changed anything. What we have had to do is space out people, so there’s less people in the OB unit than there would normally be. It’s just critical roles only. Everyone else is being put out in Portakabins and other areas,” with about 25% more individual spaces this year, and “making sure people work outside as much as possible.”

The compile edits used to be in the OB truck, “because they needed to be near production so that they could communicate better, but it was deemed that they would be one of the things that could go out and they could do their job outside of the van, just with talkback and monitoring. That freed up room to move three people out of the production gallery into the area that the compile edits used to be in. It’s basically about shuffling people around to make sure that people that need to be in the OB unit are in the OB unit. People that don’t need to be are somewhere else,” said Sexton.

The overriding requirement since Covid has been the need to ensure productions could carry on while remaining safe. “I think the focus has been more on that than any dramatic change. It’s just doing what we used to do, but doing it safely and actually get to the end of the week without everyone catching Covid,” said Sexton. 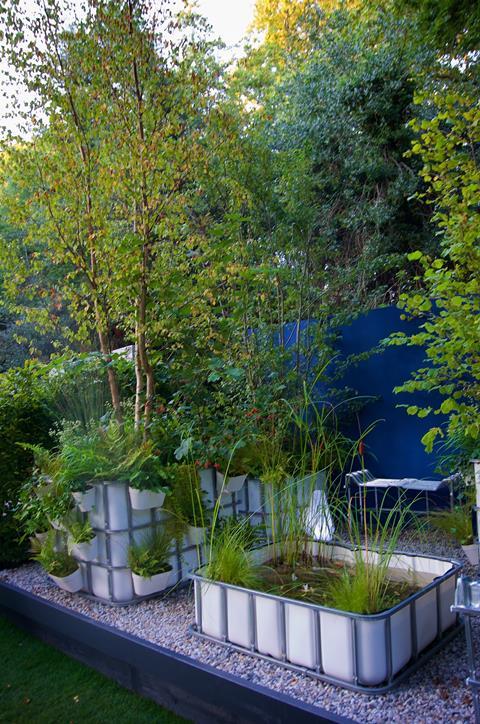 “Whereas during the pandemic it was all about remote production, which drove quite a lot of innovation,” added Fell. “But now we’ve returned to business as usual, and I think now the innovation in these sort of events will kick off again, but I think it was just a bit of a pause and now everybody is picking up again.”

When Timeline won the contract it had already introduced a lot of new technology, such as new 4K cameras and H.265 links, and relatively little has changed in OB technology since, particularly in the last 18 months, when the emphasis has been on remote production, something Timeline has done a great deal of at its Ealing Studios base.

However, Sexton said that while remote production would work for some elements of Flower Show coverage, “I think production might find it hard with all the PSCs running around.”

It also isn’t in UHD or HDR, because the BBC “doesn’t have a natural outlet for it in 4K or HDR,” said Sexton. “It would be a fantastic show to do in HDR, even if only in HD HDR, just from the nature of the content.”

Doing everything in RF on a big site, especially in central London, required a lot of planning, but the system, using DTC HEVC links on the two gigahertz band, “haven’t given us any issues,” said Fell.

“The infrastructure that we put in has worked well. There are some limitations with the spectrum that we can get that puts some limitations on the system,” but the site is covered with six separate RF receive locations (including two locations in the OB area – one in the studio and one at the OB truck), all running eight-input MRC (maximum ratio combining) diversity, “which is a system which can make the best use of all of those inputs simultaneously to build up the best RF reception in each receiver.”

Four of the receive locations use RF over fibre back to the OB compound, while the two locally use copper cable.

“It’s a very strange combination of live and not live. It’s recorded as though it was live, and the technology that we use is live technology, but it’s essentially a recorded show,” said Simon Fell.

“The PSC crews operate entirely independently. They’re literally going out and recording material and bringing it back to edits,” said Fell. “The seven radio cameras operate in a more live mode with the presenters, also running to Autocue, which we also radiate.

”So there’s an Autocue feed down there and reverse vision feed that get radiated to the two teams operating with the radio cameras. They operate entirely as though they were live, but the output from the receivers go to EVS for subsequent edit,” although as it gets mixed live, those pieces need relatively little editing.

“The seven radio cameras tend to work in a team of four cameras and a team of three cameras, so you get that multi-camera shoot. And that is mixed live,” added Sexton. “That mixed output goes into EVS and then the edit tidies up anything they want in that EVS, and they drop in anything that’s been mentioned. Maybe a flower or something that wasn’t caught live.”

Compared to most OBs, this is an unusual workflow. “Other OBs are normally either mixed entirely live in one go, because they’re normally covering sports, which has a start and a finish. However long the game is, that’s it, you’re done. Whereas here you have the opportunity to do each individual bit. It’s more of a magazine programme format than just covering a live event. It’s trying to tell a bigger picture story than just covering a match. So, it’s quite different to most live OBs.

”The other form of OBs that get recorded tend to be in the entertainment industry, but again, you’re still covering something from start to finish with no gaps. It’s entirely linear, whereas this we can do things out of order if you want. It doesn’t really matter, as long as it’s all there by the end of the day.” Indeed, there are often last minute changes to the planned shooting schedule, particularly when the RHS judges go round, as the BBC is not allowed to film at that time, so they have to react to the judges’ progress.

“It’s a very strange combination of live and not live. It’s recorded as though it was live, and the technology that we use is live technology, but it’s essentially a recorded show,” said Fell.

There are two open air studios: an evening studio, which is on a platform in the OB compound at one end of the main avenue, with a view across the showground, and a daytime studio right behind the Grand Pavilion, where it’s right in the heart of the site surrounded by the public.

This year’s event was sunny and dry, but when it rains, the presenters get wet – or have to get the umbrellas out. “That is the advantage of not being totally live. If the weather was to get absolutely horrendous you could probably shuffle the day slightly to try and record in the dry,” said Sexton.

“It’s a really flexible way for the production team to work, because they capture material as quickly as live radio camera operations can,” added Fell. They don’t have to bring things back. They can mix it straight through the truck, but they’ve also got that combination of the ENG material that they can drop in, so it’s a very flexible way of working, and pretty quick.”

Besides the gardens and flowers on show, there are also a lot of visiting celebrities, from real royalty to TV royalty, with many celebrity guests also doing their own short reports – on favourite things they’ve spotted at the show, for example – so there can be a lot of presenters on each show. “I think that’s one of the nice things about the show. I think that lends a lot more interest. The fact that it has all sorts of different perspectives on the event from each of the different presenters. They sometimes don’t agree with each other,” said Fell.