The roll out of ATSC 3.0 was a major focus of discussion at the first of the IET Media Technology Network’s John Logie Baird Lectures – held as part of the IBC 2022 Conference – titled ‘The State of the TV Business and the Next 5 Years’. 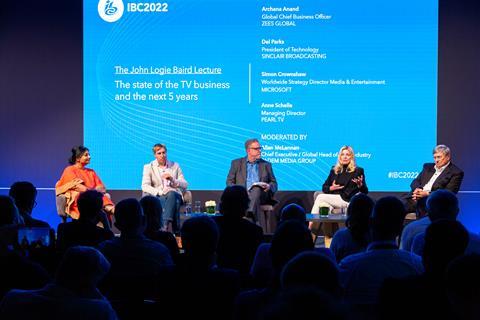 Anne Schelle, Managing Director of Pearl TV, the business organisation for US broadcast companies, said NextGen TV is on target to reach 80% of US households next year. “We have over 120 TV models available to the consumer,” she said, adding that by 2024 some 55% of TV’s sold will be NextGen.

Del Parks, President of Technology at Sinclair Broadcasting, said that viewers don’t care where they get their content, whether it’s over the air or it’s OTT. “If there’s something you want to watch, you’ll find it wherever it comes from. And so the technologies of over the air delivery had to change because the core technology ATSC 1.0 is not suited for over the air, it never was. Think of ATSC 3.0 as OTT over the air… it’s an IP stream that is very easy to receive.”

The technology promises to give a new lease of life to over-the-air television. “OTA is the ability to really reach the vast audiences that we’ve always done with television,” said Allan McLennan, Chief Executive of Padem Media Group.

Watch more All the best video from IBC2022