The Super Bowl is usually the biggest day in the US broadcast calendar but this year it touches down in the middle of 2,800 hours of Beijing Winter Olympics coverage, so what will NBC do to make it standout?

Since NBCUniversal owns rights to both giant events it will enjoy a field day in ad sales but needs to get the live production spot on. 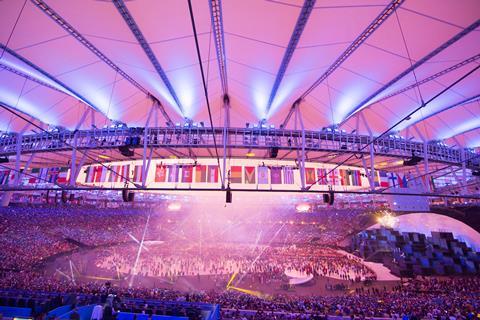 “The biggest day in American sports is sandwiched between the biggest event in the sports world,” said Jenny Storms, CMO, Entertainment & Sports, NBCUniversal in an online press event adding that ‘Super Gold Sunday – as NBC has branded it - has been part of the broadcaster’s planning since the summer.

Ideally, it would have had longer but its wall-to-wall coverage of the postponed Tokyo Olympics probably set things back.

“While I want to make the game feel like a spectacle, which we will, I’m more concerned about how we’re going to cover those critical moments of the game,” Fred Gaudelli, NBC

It’s also 30 years since LA hosted a Super Bowl. That was when the Cowboys beat the Bills at Pasenda’s Rose Bowl. Technically, that’s several kilometres outside of LA, noted Gaudelli which is why NBC is going to town on twinning SB LVI held at the SoFi Stadium near LAX with Tinseltown.

“We hatched the idea during the pandemic to do an open [to weekend coverage] that merged Hollywood with Super Bowl.”

It will be hosted by Halle Berry, feature clips of famous football-themed movies and cameos by Hollywood actors and Super Bowl luminaries.

“SoFi is a magnificently architectured structure and we want to show that off. In truth there’s not been a Super Bowl in LA since Miami played Washington in 1973 so there will be an LA flavour in our graphic look and sprinkled throughout the broadcast.”

The halftime show is a production all to itself and this year features performances from Dr. Dre, Snoop Dogg, Eminem, Mary J. Blige and Kendrick Lamar all produced by Jay-Z (who did the same for half time shows featuring The Weeknd in 2021 and Jennifer Lopez in 2020).

NBC has also hooked in the Jurassic World franchise from sister studio Universal to its marketing. There will be a sense of the blockbuster to NBC’s actual game coverage too. Last year’s CBS-produced big game fielded 120 cameras, and a ‘Trolley Cam’ flying alongside the field from 10 rows up. NBCU want to up the ante.

“The cameras we add for this are really to capture situations — and to make sure there are no unanswered questions and we have all the critical looks.” 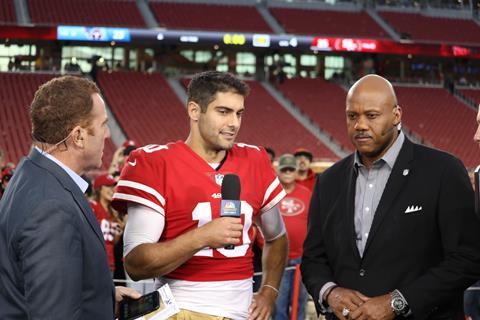 It’s likely that it will deploy some camera positions with technology more familiar to a Hollywood movie than the rough and tumble of live sports. These so called ‘megalodon’ rigs combining cine-cameras like Sony Venice with wide angle lenses have become a regular feature at major sports events in the past year with directors using the shallow depth of field to give audiences a distinctive view of action on the sidelines, goal celebrations or crowd atmosphere.

NBC will debut a new virtual graphics package for the game which will combine an on-field Steadicam with SoFi Stadium’s Infinity Screen LED “awesome” scoreboard as a graphics display for some of the on-air virtual graphics.

What the Comcast-owned company will not be doing, though, is 4K HDR. It has been slower than other US broadcasters in switching cameras and production systems to UHD although the real impediment is a lack of a distribution outlet for the format.

Fox Sports, which does more regularly air 4K live including the 2021 Major League Baseball at Field of Dreams and the 2020 Super Bowl (albeit reportedly uprezzed from 1080p), has the rights to next year’s Super Bowl LVII at State Farm Stadium Arizona. That’s expected to be the first true 4K Super Bowl production.

The entire event will be simultaneously streamed on NBCUniversal streaming service Peacock, marking the first time that has happened. In addition, Telemundo becomes the first-ever Spanish-language broadcast network to air the Super Bowl.

While there’s no doubt that an accelerated switch to streaming is underway, the traditional broadcast market continues to deliver substantial revenues for the major leagues too – revenue that’s guaranteed for years.

The NFL signed a U$110bn deal last March to keep the bulk of its games with the quartet of traditional broadcasters CBS, ESPN, Fox and NBC until 2033. At the same time these broadcasters plan to simulcast live games on digital platforms Paramount+, ESPN+, Tubi and Peacock.

“We now have a decade of visibility into who our broadcast partners are going to be, and how our fans are going to be able to watch games,” Blake Stuchin, vp of the NFL’s digital media business, told the StreamTime Podcast “The [pay-TV] ecosystem is going to remain the primary reach vehicle and revenue driver for the NFL for years to come – it’s been that way for decades – and we think that’s still going to continue to be a really important way for our fans to watch games.”

Digital distribution is an increasingly important part of the mix which is why Thursday Night Football will be exclusive to Amazon in the NFL’s first ever all-digital package for which the streamer paid $1bn a year, according to CBS NFL media rights deal 2023-2033: Amazon gets exclusive Thursday Night (cnbc.com).

As it happens, interest in the sport is soaring on digital and linear – or perhaps because it is being simulcast on multi-platforms. The NFL’s regular season live broadcasts reached an average national audience of 17.1 million viewers across linear and digital platforms in 2021 – that’s up 10 percent on 2020 and the highest average broadcast audience in six years, according to Sports Pro Media. Streaming figures alone saw ratings rise 18 per cent on last season across Peacock, Paramount+ for CBS and ESPN+.

More broadly, NFL games made up a whopping 75 of the top most-watched US broadcasts last year, according to a study by Sports Business Journal despite the fact that Super Bowl LV viewership sank to 96.4 million, down from a record high of 114.4 million in 2015, according to Bloomberg.

With a captured primetime audience, NBCU’s goal is to channel viewers of the Winter Games to its Super Bowl coverage and more importantly, tempt NFL fans to taste the Olympics. Offering advertisers the combined power of the Super Bowl and the Winter Olympics is simply too hot to pass up. Thirty second spots during Super Bowl have been selling for $6.5m.

“We’ll have that 100 million-plus audience from the Super Bowl, and we’ll segue right into great live Olympic coverage back in Beijing,” said Pete Bevacqa chairman of NBC Sports. “To me that’s an unbelievably, really unparalleled never-before-seen, one-two punch.”

The National Football League, teams and players are also tapping new revenue from the craze for NFTs. Anyone who buys a ticket to Super Bowl LVI has also got the chance to buy a digital version in the form of a non-fungible token, customised with their seat number. It forms part of wider trials by the league into the market and trade for digital collectibles. The NFL has already partnered with Dapper Labs to create digital video highlight NFTs similar to the NBA’s successful Top Shot venture.

“Creating more one-to-one experiences through innovation and technology is a high priority across the league and clubs,” said Bobby Gallo, head of club business development at the NFL in a press statement. “Leveraging the emerging world of NFTs is a new and exciting way for us to create additional value and to further engage with fans who attend select games by providing a virtual commemorative ticket.”