Concerns around how to create sustainable workflows in media, the question of where media fits into the global emissions picture and how to identify and respond to key drivers for change were central themes at IBC2022.

The four speakers set out to raise awareness on the complex issues and responsibilities that the media industry must face up to. They pinpointed the lack of clear and consistent measurements currently in place and the need for education on energy consumption in all aspects of media, from production to distribution, and how navigating through the complexities can offer cost effectiveness and business opportunities.

Lange opened the discussion, concerned about how many organisations have no idea where to start with sustainability in media, and to answer the questions is it real? she confirms, “It is most definitely real.”

She delved into the production workflow, from content creation to content manipulation and distribution, and pointed out that the biggest current challenge in implementing sustainable practices is that there are no standards of measurement and a lack of mandates, while some companies may even see implying a sustainability method as an added expense.

Joni emphasised the importance of defining sustainability via a human-centric approach - the intersection between people and planet: “Sustainability is about a stable resilient state of being and how do we get there? When we take the humanity out of this conversation, we are not going to drive the empathetic change we need to see in achieving this resilient state.”

Dom Robinson spoke of energy consumption awareness in broadcasting vs. streaming: “In certain parts of broadcast and certainly in things like data centres, telco ISP, there’s been a lot of [sustainability] thinking for a long time. But given that streaming is typically talked about as being 70% of network traffic these days, and we have a top line figure that ICT is burning 3% of all the world’s energy…What I felt was [in] my industry, because we don’t know, we haven’t got that finger on the pulse yet and we’re not ready to be transparent about things. We haven’t worked out how to measure. [Energy consumption is] an afterthought.” 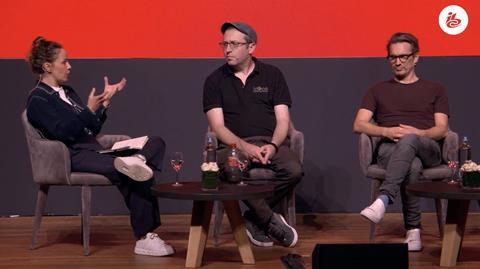 Robinson added: “There was a lot of thinking that there’s a linear relationship between bandwidth and energy. So if you reduce bandwidth, you’re supposed to reduce energy. It doesn’t really work like that. We don’t quite know how it does work, because we are yet to go and measure it…There’s no common framework of language.”

Joni also recognised the lack of clarity surrounding sustainability in the industry: “You sort of cherry pick where we’re going to use it so we can have an emissions reduction, and we’ll give it a stand and say it’s sustainable, but we forget to look at the interdependent relationships. And when we don’t do that, we just have further and further knock-on effects. And one of the things that we see now is carbon tunnel vision.”

Kristan Bullett mentioned the major cloud providers who all show reports on cloud energy consumption, yet fail to provide that data’s vertical alignment with cost effectiveness: “I think we need to level that playing field.”

Lange believes that the first step is to work with the knowledge we already have, such as knowing that a one hour scripted television show produces about 80 tons of CO2 emissions, and a large budget production produces over 1000 tonnes. “These measurements are a starting point and enable the industry to get behind improvements, such as virtual production and digital efficiencies to make subsidies and lasting improvements.”

The panellists discussed the ‘three scopes of emissions’ measurement, from the direct emissions that come from sources that are controlled by the business, to the indirect emissions from the sources of energy consumed by the business, and finally all the emissions from the business’s supply chain up and down – the most complex of the three. Lange remarked: “It’s estimated that this scope three can be, on average, five and a half times more than the emissions from its direct operations… The math to get to net zero then becomes the straightforward equation, the ‘not so easy to achieve’…Any business [aiming to] operate at net zero must incorporate all three scopes in their calculations.”

Richardson suggested introducing a peer review process: “From people we consider experts. So we’re not hearing it from analysts and observers. We’re hearing it from our peers in the industry. And we’re really trying to engineer an actual change from the ground up within the distribution networks…looking at different specific technology areas like compression, like terminology and measurement.”

Getting everyone on board

Joni noted the central importance of collaboration: “Every organisation is different and we cannot look at sustainability with a blanket mindset.” She suggested that one solution is to integrate sustainability into existing flows and getting everyone on board in the supply chain to achieve a resilient system: “You really need to get people together to…find ways to share information…It’s collaboration.”

Richardson offered advice on who to address in the workplace – to share the vision within the organisation, noting the connection to Corporate Social Responsibility (CSR) strategies:

“If you can convince the finance director things start to happen much quicker. The energy crisis has come at a good time for sustainability!”

Lange summarised: “For the media technology sector, like all industries ‘Going Green’ has become a priority as we do our part. That also means that there will be business opportunities, as leaders better understand the sustainability topic. They’ll see that operating in a sustainable way means being more efficient and cutting waste and costs.”

Bullet concluded: “I think there’s a real opportunity here. Nobody likes greenwashing, but don’t wait for emerging standards. And I don’t think that needs to be that difficult to do. And because if we reduce our resource consumption, we’ll increase our margins and doesn’t that feel like a win-win situation to be in?”

The four panellists were speaking at an IBC2022 session titled ‘Sustainability In Media: Is it Real, Or Just the Latest Thing?’, a session moderated by Cedric Lejeune, CEO of Workflowers. For more content from the IBC2022 Show check out the latest IBC2022 video and the full coverage on 365.

Read more Pointing to the massive scope of sustainability