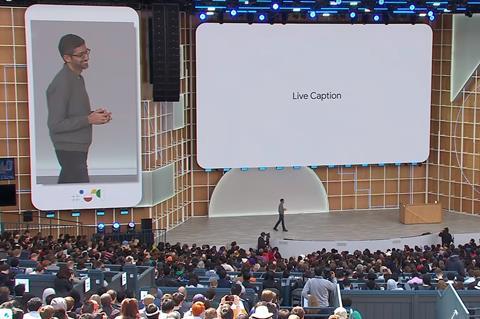 Pichai previewed Live Caption, a new feature to improve video viewing which will enable users to turn on captions for any video playing on their device whether it has closed captioning embedded or not.

Live Caption has been designed to automatically caption a video conversation, podcast, in home and native video content from any source, empowering those who are hearing impaired to access video content on the go.

Pichai said: “Developing products for people with disabilities often leads to advances that improve products for all of our users.

“This is exactly what we mean when we say we want to build a more helpful Google for everyone. We also want to empower other organisations who are using technology to improve people’s lives.”

Google’s mission remains the same as the last 21 years, Pichai explained, to make information universally accessible, helpful and reliable to its users with the new tools and features a step closer to this goal.

“We believe technology can help us be more inclusive,” he added.

New mobile experiences
Live Caption will work without an internet connection for pre-downloaded videos thanks to Google’s artificial intelligence (AI) on-device feature which adds an extra layer of privacy to the captioning.

In a blog post, Google Android director of product management Stephanie Cuthbertson explained the process: “As soon as speech is detected, captions will appear, without ever needing wifi or cell phone data and without any audio or captions leaving your phone.”

Separately, Google announced security and privacy as a central focus of its upcoming Android Q operating system. which is expected to launch this autumn. The tech giant said it will make a beta version of Android Q available on 21 devices from 13 manufacturers, including LG, Sony and Huawei, as well as its own range of Pixel phones, effective immediately.

Google’s company mission has evolved from a search company that helps you find answers to a company that is positively empowering lives, with Pichai adding that its line-up of products is “built on a foundation of trust and privacy.”

He explained: “Google is no longer a company that just helps you find answers. Today, Google products also help you get stuff done, whether it’s finding the right words with Smart Compose in Gmail, or the fastest way home with Maps.”

It has committed to applying the strongest security across its products and platforms: “We’ll continue to ensure our products are safe, invest in technologies that allow us to do more for users with less data, and empower everyone with clear, meaningful choices around their data.”

Earlier this month Facebook chief executive Mark Zuckerberg declared the social media giant will build a more privacy-focussed platform and fundamentally shift how products are built and how the business is run.