IBC visitors can be among the first to get their hands on the new Blackmagic Pocket Cinema Camera 6K G2, the latest model of the popular imager which includes an adjustable touchscreen, a larger battery for longer shooting, plus support for an optional electronic viewfinder.

The G2 replaces the original BMPCC 6K and adds features that were previously only found on the 6K Pro model. It features a larger Super 35 sensor that allows shooting with a shallow depth of field and anamorphic lenses. It also houses the latest Blackmagic generation 5 colour science and retains the 13 stops of dynamic range, dual native ISO and EF lens mount from the previous model. 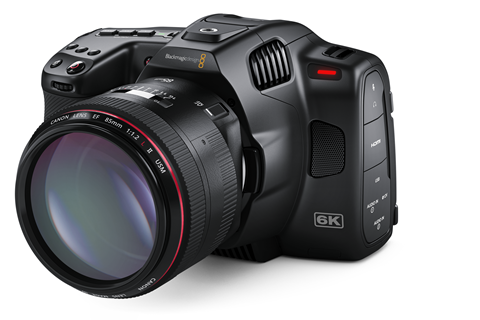 Grant Petty, CEO of Blackmagic, said: “Since the release of the Blackmagic Pocket Cinema Camera 6K Pro, customers have been asking for some of the features to be added to the 6K model. We’ve been able to achieve even greater manufacturing efficiencies which means that we are now able to release this new model.”

The addition of a tilting LCD display, pro OLED EVF compatibility, and larger Sony-style NP570 batteries are also different from the Pro model. As with previous version it includes a full version of DaVinci Resolve Studio, for editing, colour correction, audio post and VFX.