The compact unit boasts 500W of power, two zones of control and an intuitive touchscreen interface. The RGBWW light has a CCT range of 2,500-10,000K and uses new LED technology created for Cineo’s Quantum II, which the new studio complements in a smaller, lighter package. 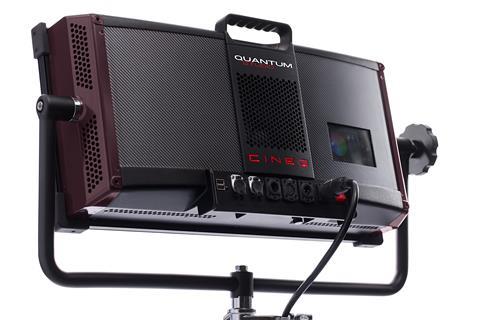 The Quantum Studio weighs 12.7kg, is water resistant for outdoor use, and needs no ballast due to its internal power supply. It can deliver up to 1660 lux at 3m (without diffusion) at 5600K.

It can be controlled wirelessly or wired using DMX-512, RDM, sACN or Cineo’s own Stagelynx protocols, or via the HD touchscreen. There are 300 preset colours and digital gels, but users can add up to 64,000 custom presets. All of Cineo’s products use proprietary phosphor-converted white light LEDs, as well as phosphor-converted saturated colour LEDs to create a balanced, natural looking spectrum.