Major updates will be debuting at IBC for live production platform Grabyo Producer. The company is launching instant replay and a new VOD playout system to extend its production services, building on its cloud control room, multiviewer and audio mixer.

Grabyo’s instant replay solution will allow operators to create synchronised replay clips from live productions for playout, with speed controls for each VOD asset. The controls will be available inside Grabyo’s control room, with customised views available for larger productions with multiple operators. 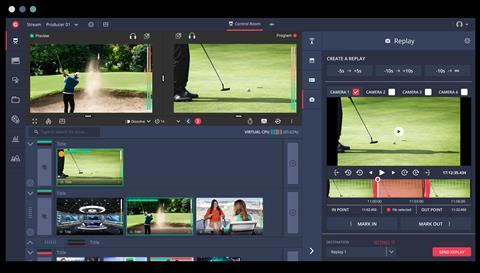 Grabyo Producer has been enhanced with some major updates

Gareth Capon, CEO, Grabyo, said: “We’re excited to be back at IBC to catch up with everyone at the RAI once again. We’re bringing some of the biggest and most advanced feature updates to Grabyo we’ve ever built. Over the past three years, the team has worked hard to push the limits of cloud production, with our customers delivering some amazing things with the platform. It is such an exciting time for cloud video production, and there’s still so much more to come.”

Since the last IBC Show in 2019, Grabyo has added several major developments to its live production platform, including the ability to ingest and egress live video in SRT, Zixi and RiST formats. The company also recently partnered with TikTok, as part of the social media platform’s publishing API launch.