Powerful new capabilities have been added to Trance, the enterprise-grade, cloud-based application for closed captioning and transcription from Digital Nirvana. 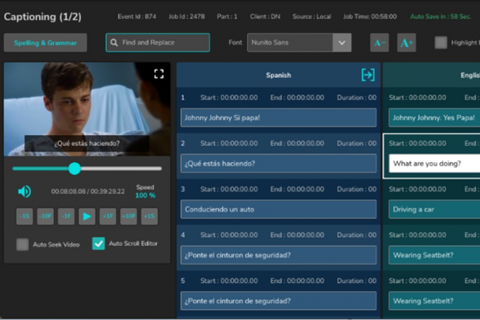 With Version 3.1, Trance is the industry’s first closed-captioning solution to offer NLP-based auto-conversion, which automatically converts transcripts into highly accurate, time-synched closed captions. As part of this exclusive feature, Trance automatically identifies music, silence and other non-text audio, and provides intelligent line breaks for captions. Previously, operators had to manually correct the awkward splitting of words that appeared at the end of lines or dangling punctuation. Now, Trance automatically moves such words to the next line and takes into account multiword proper names that should be kept together. For instance, if ‘New York’ appears at the end of a caption line, Trance will move the full title to the next line. Robust presets and grammar rules ensure that lines do not start with misplaced punctuation, such as the apostrophe in a contraction.

The latest version of Trance is said to set another industry standard with automatic shot change detection, including configurable thresholds for generating alerts when captions fall out of compliance. For instance, Trance can identify the end of a shot and ensure that captions belonging to the shot do not cross over.

Trance 3.1 also includes a frame-rate conversion feature that automatically converts captions and video that is to be repurposed for multiple platforms. An example is a broadcaster that would like to repurpose a previously aired video for presentation on the network’s website. The captions would go out of sync when the footage was converted to the target frame rate, requiring the broadcaster to create an entirely new caption file manually. Trance automatically converts the original captions from 29.97 fps (for broadcast) and generates a new caption file with time codes in the 24.97 frame rate needed for web streaming.

“Introduced earlier this year, Trance 3.0 was a major update that brought significant efficiency gains to media companies’ internal captioning processes — helping to open up powerful new business opportunities for distributing compliant content on popular streaming platforms,” said Russell Wise, senior vice president at Digital Nirvana. “But we haven’t rested on our laurels with Trance 3.0; instead, we’re continuing to develop the platform and add new capabilities designed to make the professional captioning process faster, easier, and more efficient than ever and also help broadcasters deliver the best possible experience to viewers who rely on captions.”