Apple TV+ and Paramount+ favoured by streaming switchers in the US

Apple TV+ and Paramount+ are the most popular services for US subscription video on demand (SVOD) switchers, according to research by Ampere Analysis.

Ampere defines switchers as those who move from one subscription service and commit to another contract within 60 days. 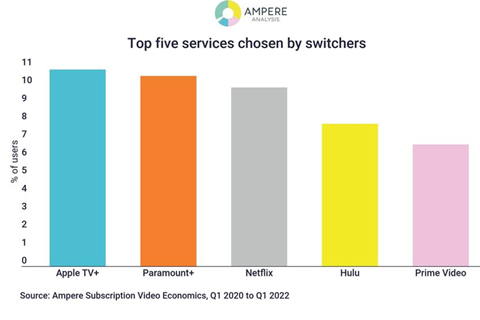 Apple TV+ and Paramount+ are the most widely chosen platforms for this sub-group of churning streaming customers. Of all switchers across all platforms analysed by Ampere Analysis, 11% chose Apple TV+ and an equal proportion selected Paramount+. Netflix was third choice for the group.

The study looks at the 27-month period between Q1 2020 and Q1 2022. It reports that Apple TV+ is the first choice for Netflix deserters, but Prime Video and Hulu are close seconds.

Providers with a family of streaming services benefit from the bundling effect in terms of cross-promotion, greater average revenue per user opportunities and customer retention. The advantages are especially clear for Disney+. The most popular next service for Disney+ switchers is its sister platform Hulu. Similarly, Hulu switchers’ first choice is a Disney+ subscription.

A similar effect is also seen among Paramount+ churners. While Apple TV+ is the first choice and Netflix the second, switchers choose Showtime (owned by Paramount) as their third choice.

Overall, around 30% of streaming subscribers switch services in any given two-month period. Of users who leave a service, just over half (56%) choose not to re-subscribe or switch to a new service within two months. However, 14% of customers leaving a platform return within two months, and this boomerang behaviour reduces effective churn rate.

Netflix leavers are most likely to boomerang: 23% of its churners resubscribe within two months. The comparable rates for other services are 11% for Disney+ and Hulu, 10% for Apple TV+, and 15% for both HBO Max and Paramount+.

Report author and analyst at Ampere Analysis Ben French said: “Switchers are experimenting with different platform mixes within the home, moving spend to some of the newer and less penetrated services while maintaining a core base of services. It’s some of these newer, smaller services that the incumbent streamers most need to keep an eye on.”