Hackman Capital Partners and Square Mile Capital, along with The MBS Group, are to develop and operate a new film and television studio in Ireland, Greystones Media Campus.

The group, which was behind the acquisition of Ireland’s Ardmore Studios and Troy Studios in August 2021, has been selected to develop the new Greystones Media Campus, approximately 15 miles south of Dublin. 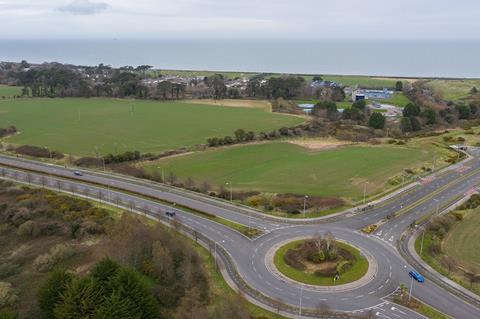 The Irish studio will be more than 670,000sqft of studio space with 14 sound stages, creating 1,500 jobs once complete

When fully developed, Greystones Media Campus will be Ireland’s largest studio complex with more than 670,000sqft of studio space on 44 acres with sea views, including 14 sound stages. The first seven sound stages and associated office, workshop and backlot spaces will be delivered in mid-2024.

The total investment in the project is estimated at nearly €300 million.

The development will double the high-end film and television stage capacity in Ireland.

Greystones Film and Television Studios will be the latest addition to the Hackman Capital/Square Mile Capital portfolio of studio assets, which includes 18 studios and 120 stages. These include The Culver Studios in Los Angeles; Wardpark Studios in Scotland; and the under-construction Eastbrook Studios in London and Basin Media Studios and Downsview Studios in Toronto.

The partnership’s affiliate, The MBS Group, will assist in the studio’s design and will also oversee studio operations and provide production services and equipment rentals when the new studio campus opens its doors.

Paschal Donohoe, Ireland’s Minister for Finance, said: “On the back of what has been a record-breaking year for spend on TV and film production in Ireland, this level of investment will serve to enhance Ireland’s reputation as a location for high-quality production.”

The audio-visual sector is currently worth over €1 billion to the Irish economy, with approximately 12,000 people employed in film, television and animation production.

Hackman/Square Mile said the new development in Greystones will create 1,500 new jobs once it is operational (and 450 jobs during the construction phase) along with other direct and indirect benefits to Ireland’s economy.

“We are grateful to ISIF and Capwell for this exciting opportunity and we’re thrilled to be expanding our footprint in Ireland,” said Michael Hackman, Founder and CEO of Hackman Capital Partners. “We see Ireland as a premier destination for content creators across the globe, and we’re committed to seeing it grow exponentially. There is enormous talent here, not to mention a stunning landscape and some of the industry’s best financial incentives for filmmakers.”