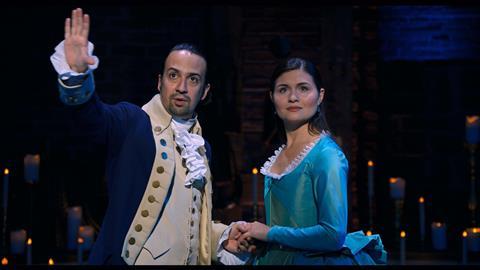 Broadway musical Hamilton has landed on Disney+ demonstrating “a leap forward in the art of live capture” according to the media giant.

Hamilton, a multiple Tony Award winning musical about the life of the first US Treasury Secretary Alexander Hamilton, was shot at the Richard Rodgers Theatre in New York in 2016, among a live audience, across three days of showings.

The film version, which was originally due to be released in 2021 but was moved forward due to Covid-19, features the original cast, including writer and star Lin Manuel Miranda as Hamilton himself. It is directed by Thomas Kail.

“I fell in love with the musical storytelling growing up with the legendary Howard Ashman-Alan Menken Disney collaborations,” said Miranda when Hamilton was first announced.

“I’m so proud of what Tommy Kail has been able to capture in this filmed version of Hamilton – a live theatrical experience that feels just as immediate in your local movie theatre. We’re excited to partner with Disney to bring the original Broadway company of Hamilton to the largest audience possible.”

Cameras were positioned among the audience, according to Kail, with none placed onstage, in order to give viewers the same experience they would get if they were sat in the audience.

Almost a third of Hamilton’s 46 musical numbers were shot outside of those live performances, Kail told CinemaBlend, so that they could go on stage with a Steadicam or a dolly.

“We had a few numbers where we were able to get on stage with a Steadicam or have a camera on a crane, or on a dolly,” Kail added. “Just to give a different feel to some of the proximity we can have with the company.”

Disney opted to move the release of Hamilton from a 2021 cinema release to July 2020 on streaming platform Disney+, amid the coronavirus pandemic.

It comes ahead of Disney’s expansion of its SVOD into eight new European countries in September.

The Covid-19 pandemic has created serious challenges for the theatre sector across the globe. Earlier this week, UK MP’s pushed Prime Minister Boris Johnson to commit more money towards supporting theatres, which have been forced to close doors due to the pandemic.

Industry body Bectu has accused Johnson of focussing too much on reopening, saying the sector needs more financial support.

Yet streaming has offered one outlet for numerous theatres, including the UK’s National Theatre, which has been airing live capture performances on YouTube during lockdown.