Greater adoption of remote production will in turn accelerate the shift of live workflows to the cloud, according to an IBC Digital panel tasked with examining the broadcast and media tech trends that will define 2022.

Unsurprisingly, having been accelerated by Covid, remote production figured strongly in the discussion among the technology leaders. 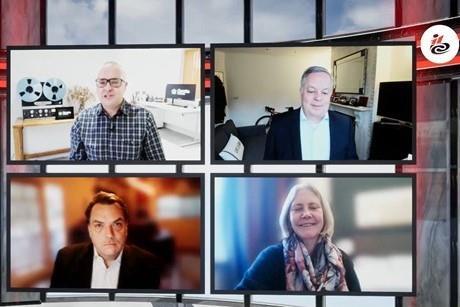 As Gordon Castle, SVP for technology and operations in EMEA for Discovery, pointed out, cloud already plays a limited role, with cloud-based contribution used as backups to big events. “What’s going to happen next is that we’re going to move big media processing, vision mixers, communication systems and audio systems all into the cloud,” he said.

“You can do all these things in the cloud today but not at the full scale you need for a big live production,” said Castle, stating that there are two key hurdles.

One is handling the sheer complexity of a large-scale live event with multiple inputs, replays and complex audio mixing. The other is latency.

“This is why contribution in the cloud is so important. Once the contribution is in the cloud, you’re not adding latency. The first access you have is to audio and video and then you can process it directly in the cloud and distribute it on. That’s really the enabler.”

Hurdles still remain to a native cloud contribution workflow, especially when it comes to the crucial first-mile resiliency which is currently handled by multiple redundant paths. But the momentum in the industry to solve these problems is strong.

“There’s not a broadcast or an event that we do that doesn’t have some cloud component or cloud element, and I think that will absolutely continue to grow in the future,” agreed Anna Lockwood, head of international at Telstra Broadcast Services.

“I would never have thought that was possible, and the other component that I think the cloud potentially will help with is some of the ancillary assistance technologies that will aid us in producing live programming,” he said.

He also, though, sounded a note of caution about the prospects of achieving 100% cloud workflows.

“I think that last 10% of development that’s needed for cloud to be used in live is going to take a little while. Live sports or live production is the torture test for all of these kinds of technologies, and I think that is going to be a steep climb.

Connectivity is, of course a crucial component of this. Fibre is critical and will be for some time yet and there is a growing focus on internet delivery over unmanaged networks via protocols such RIST, SRT, and Zixi. This, the panellists said, was part of the emerging connectivity landscape that also increasingly folds in 5G.

“One of the things that’s really compelling around 5G is the aspect of creating unique paths, software defined networks in the network, that enables you to reserve the bandwidth you need on a public service,” said Castle.

This guaranteeing of connection is a part of the live broadcast DNA, but there is steadily more being sent over the public internet.

“Also bonded cellular technologies are becoming far more mainstream in terms of not only just contributing cameras, but also contributing entire shows,” said Davis. “So whereas before, we might have used that tech as a third or fourth, ‘break the glass’ backup, now, we’re actually seeing that being a primary contribution source for certain things.”

The panel saw one of the other defining trends of 2022 as being both the increased impact of using new production techniques to bring more sports to the screen, and of using them to make more impact on the screen.

The list of technologies cited was a long one. A more cinematic look for some events from using large format cameras with a shallow depth of field; the increasing use of drones for different camera angles; volumetric capture to create realtime 3D environments; the use of AI to provide deeper insights into growing amounts of sporting data; and the increasing adoption of Unreal and Unity as graphical platforms to annotate programs, as well as helping drive the use of LED volumes to take virtual presentation spaces to the next level, such as with the Eurosport Cube.

“I think that we’ve reached a point of acceleration, where these technologies are going to come to bear in a very real way in a very short period of time,” said Davis.

There was a guarded response to the concept of the metaverse. “Maybe I was bitten too hard by Virtual Reality six or seven years ago, but I do think the ideas are good,” said Castle. “It’s just going to take some experiments and it won’t be a transformative overnight thing.”

But, there was an acknowledgement of the increasingly fertile crossover between esports and traditional sports. This in turn is driving an increased tolerance for viewers to absorb data and multiple camera angles, as well as heightening an expectation of interactivity from the audience. As ever though, it’s about how the tools are used rather than the tools themselves.