Despite mounting pressure from the patent pools, the Alliance for Open Media’s top tech firm members are predicting widespread deployment of its royalty-free next-gen codec AV1 “within the next couple of years” 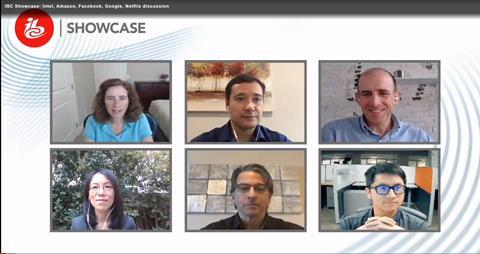 Sheen revealed that its games platform Twitch is looking to stream AV1 to its gaming community in 2K - and is current trialing the codec format on a UHD 120 frame per second gaming content demo.

At the lower end, Sheen added that Amazon was also undertaking research with chip manufacturer ARM on the use of AV1 in mobile devices under $300 –whose users are key to Amazon’s video consumption.

Facebook’s director video encoding David Ronca - who credits AV1 with helping the firm reduce video egress as the pandemic led to increased video usage - added that it too was running a large scale decode test on mobile devices.

Sheen added that to make AV1 a viable codec format that could replace H.264 in the future, it needed to be able to handle both high and low end formats. To that end, he added, “we’re working on across multiple ecosystems.”

Google’s director of product management Matt Frost, pointed out that AV1 was introduced at YouTube in 2018 and the codec has been used to stream 40+ million pieces of content – “from the very lowest resolution to 8K.”

As well as adding AV1 support on Chrome and Android, earlier this year the tech giant also added AV1 to its Duo video conference solution. Keeping the conference tools royalty free, he added, was essential.

“Coming out of a pandemic we’re reminded of just how important these tools are – and they can only be built without codecs that come free of expensive royalties in a patent pools.”

Frost was alluding here to the ongoing IP battles that are being contested through patents administrator Sisvel, whose clients include Dolby, JVC, Ericsson, Orange and who have declared that their IP is foundational to AV1.

Yet despite these challenges, the FANGs appear bullish about widespread AV1 deployment.

Netflix senior research scientist Andrey Norkin – whose company has been streaming in AV1 since February – notes that AV1 “is in the typical cycle of availability”. He added that the more AV1 decoders there were out there, the better. To this end, he said that Netflix is aiming to make its content available as early as it could for AV1 use, to help speed up the process.

Shan Liu, scientist and VP at China’s Tencent – which has already adopted AV1 as a video codec solution - added she doesn’t see anything preventing the codec from being used in most video live and VoD compression applications.

She added however, added that it might take longer for hardware decoders –essential for the use in higher end mobile devices – to come to market.

Both Liu and fellow panelist Intel’s Jill Boyce estimated that AV1 would be in most software apps “within a couple of years” with hardware decoders available “by 2025”.

But will AV1 eventually go on to become the dominant codec, eventually replacing H.264? Sheen and Norkin said that while H.264 “would be difficult to get rid of completely” they asserted that it would “be more dominant in newer devices, particularly in the area of 5G”.