Studio operator Stage Fifty has submitted plans for a permanent film studio near High Wycombe in the UK that should employ approximately 750 when up and running.

The application to Buckinghamshire Council contains proposals to turn the 26-acre site just off the M40 in an eight-stage studio called Wycombe Film Studios. 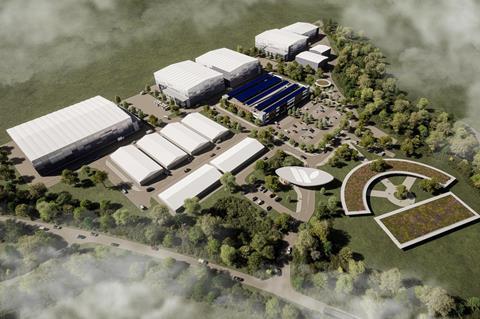 Stage Fifty says that once the studio is fully operational, it will support around 750 full-time jobs and 450 indirect jobs in the supply chain. It also plans to offer traineeships and industry placements at Wycombe Film Studios through Stage Fifty’s Academy of Creative and Technical Arts (ACTA).

James Enright, CEO of Stage Fifty, said: “We want to build a sustainable studio that the people of Wycombe are proud of, one that will create exciting new jobs for the community and generate around £305m GVA.

“Our goal is to build a studio that is not only sustainable in its construction but a place where people are excited to work in the heart of Buckinghamshire. Ultimately, we want Wycombe Film Studios to set the benchmark, attracting filmmakers from all over the world.”

Research by the British Film Institute shows that approximately 60% of production budgets are spent locally.

The plans include tree screening and green walls on the stage buildings to blend in with the tree line and soften the view for the studio’s neighbours in Claymoor Park. Specially designed cladding with faded grading will also help the stages merge with the landscape and skyline.