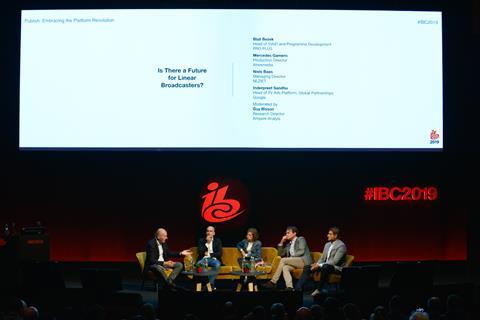 IBC2019: Is there a future for linear broadcasters?

The head of Netherlands national online video platform – an alliance between Dutch public broadcaster NPO and the two largest commercial tv networks, RTL and Talpa - made his comments during Saturday evening’s forum session: Is there a future for linear broadcasters?

“It’s not about whether you are a public or a commercial broadcaster anymore, it’s about scale. You need scale – because our competition now is global… and if you keep within the boundaries of your own countries you will lose,” he warned.

The Dutch online TV chief added that linear broadcasters are “fighting each other like hell in Holland” but that this was now “the old way of doing business.”

“If you look at it broadly it’s crazy – You need to combine all your efforts to compete at a high level of competition or you will get lost,” he said.

Baas predicted that consolidation among regional broadcasters across all markets would be another “inevitable” consequence of this global competition.

He also believes there is only enough room in the market for “one strong local platform” because of the deep pockets of the global players .

In the same session Mercedes Gamero, head of Atresmedia’s one-year-old production arm Atresmedia Studios (which has already secured commissions from Amazon Prime) acknowledged that while producers needed to think universally, content still needed to be “local in its DNA” in terms of drama and scripted.

“It’s proven that dramas in Spain works well globally - but if you want it to be successful you have to be loyal to your local audience,” she said.

On the subject of data, Gamero added that finding programme performance information from SVoD clients was often vague and sporadic process.

“We all do a leap of faith if they say a show has been successful. They just deliver the numbers when they want – and they are not numbers we can fact check,” she said.

The producer adds that collaborations between local parties and SVoD players might also negatively affect the local production market because of the lack of IP retention.

“SVoDs may be investing in more local content but they are keeping all the IP. Production companies are acting more like executive producers because they have to give all their rights away.