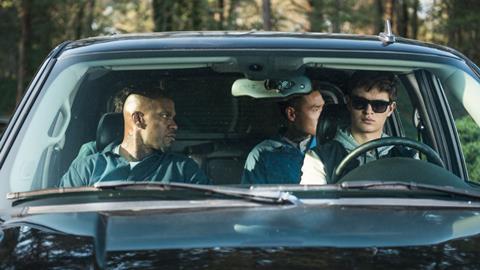 Under the bonnet of Baby Driver’s sound design

As technologies such as Dolby Atmos ramp up what is possible in the cinema, so productions are responding in turn.

The complex sound design of Baby Driver is the perfect illustration of how audio can play a key part in driving an overall narrative. 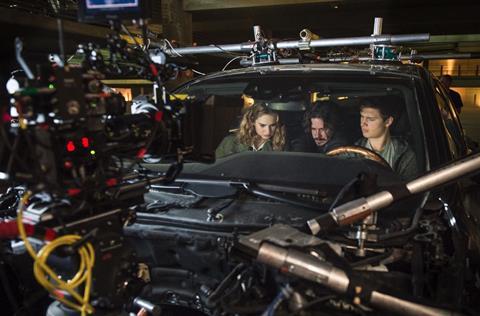 Directed by Edgar Wright (Shaun of the Dead, Hot Fuzz) and due to be screened at The IBC Big Screen, the movie tells the tale of a getaway driver — the titular ‘Baby’ — who suffers from tinnitus and constantly plugs into earphones to mask the nagging hum of his ringing ears.

The film is told from his aural perspective and the result is a movie that plays out with its soundtrack very much to the fore, with the action choreographed to the music.

That this never comes across as gimmicky is attested to by the 94% rating the film enjoys on Rotten Tomatoes, and is largely down to the sound design of long-time Wright collaborator, Julian Slater, and the work of many others in the audio department including re-recording mixer, Tim Cavagin.

“The whole movie is based on the lead character having tinnitus, so special care had to be taken in representing this — it wasn’t just a case of putting a 6Hz tone over everything,” he explains. 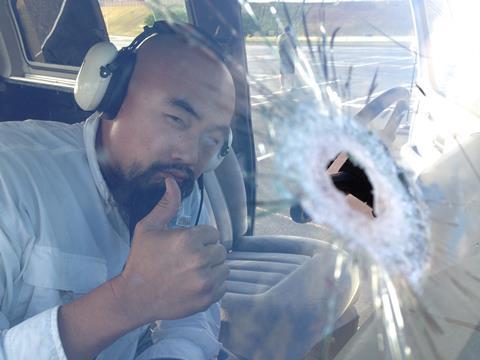 Watson Wu: On the set of Baby Driver

“The reality is far from that, and also a persistent high-pitched tone would soon have audiences covering their ears and getting pretty fed up. So the frequency we use varies, and often ran into the music. This meant that every tinnitus ‘attack’ had to be carefully thought out in terms of entry and exit key; we used subtle pitch change and processing so there were no evident key changes.”

Given the fact that heists feature strongly in the plot, eight different models of car are used in the film, and car sound effects recordist Watson Wu was tapped to record them over a sweltering eight day period at Atlanta’s Atlanta Speedway.

“I choose specific gear that can handle the violence of hard driving, the hot weather, and the loud sounds,” says Wu. “For the onboard recordings (driver’s and passenger’s perspectives), I used six microphones per vehicle. Two were in the engine compartment, one in the air intake box, one on the radio dashboard, and two for the exhausts. It was difficult to sit on the passenger seat, watch and adjust my recording levels, and, at the same time, hold on to my audio bag and door handle while being tossed around in the stunt cars. For external recordings, the boom operator, James Peterson, used a mono shotgun mic to follow the vehicles and at the same time used an XY stereo mic placed on a stand for the pass by sounds.

The brief was specific to the film, which Wu was glad about as full set recordings for each of the vehicles would have required a lot more days to complete.

“We did multiple straight runs in low, medium, and high speeds,” he explains. “Certain vehicles ran more than others. When the red Subaru WRX rally car did a fast reverse 180 degree spin out into a 270 degree drift, we did that. In fact, I had Thom Williams the stunt driver do each of the takes again and again until I liked what I captured. 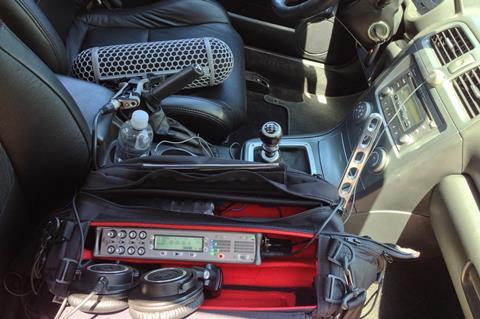 Audio equipment in the Subaru WRX

“This is the same with the Challenger speeding and doing a 90 degree slide towards the camera. We slid multiple times towards James, and did it without hitting him.”

The prevalence and pre-eminence of the soundtrack in the movie meant that everything else had to dovetail in to its sonic landscape.

“’Key’ ran across all the count elements,” says Cavagin. “When mixing Foley, you always try to make it sound like it’s part of the location sound – that still held true on Baby Driver, but we also had to punctuate many scenes in a way that that didn’t work against the tone of the music.

“Making sure featured footsteps, even putting down coffee cups, were in key with the music was all part of the challenge. Pitch changing of many FX and spot FX was required during pre-mix, making them almost a percussive instrument, playing along to the music underpinning the scene.”

The aim was to create sounds that worked both musically and cinematically.

Inevitably that took a certain amount of finessing (“A car skid, for example, may sound musically perfect but not realistic,” Slater has said), often modulating the sound to make it a better fit rather than using pitch.

Indeed, Cavagin describes the movie as ‘a sound guy’s delight’, and one of the things that helped to amplify that feeling was the use of Dolby Atmos.

Dialogue and Foley were all premixed by Cavagin at Twickenham Studios in west London, with Slater premixing his FX and music at Soho-based post facility Goldcrest, which was also the site of the final mix.

“We mixed simultaneously and would send each other our premixes at the end of each day so we could align our object panning and make sure everything went smoothly.

“Premixes were mixed in ProTools, but any object panning was done on the Neve (DFC/Gemini), and this automation was carried seamlessly across from Twickenham to Goldcrest.

“Baby Driver was always going to be a fun mix, but doing it natively in Atmos and being able to use the fabulous panning Atmos gives you made it an awesome experience,” he continues.

“Full range surround and ceiling speakers, together with the subs in the rear, meant we were never hemmed in.

“The film’s many action sequences meant that the object tracks never had long to rest before being fully utilised by dialogue, music and effects.”

The close marriage of audio and action led to many challenges in production and post. One scene shot to Bob & Earl’s Harlem Shuffle, for example, took 25 takes to get right on set and then features a whole raft of subtle sound effects including engines, repeating dialogue that changes nuance depending on its position in the song, guitar-playing extras and more.

Then, near the end of the film, a gun blast exacerbates Baby’s tinnitus and changes everything he hears. As a result, the film’s sound also changes. This led the sound design to deploy a new set of frequencies and place them spatially in a new environment in the mix, while also altering all the voices and real world sounds to amp the effect up.

”Mixing for TV drama is going to get more and more exciting from a sound point of view,” - Tim Cavagin

After the theatrical release was completed, the studio decided that a home Atmos version was also in order, which was completed by Slater in LA.

“He reports that everything we did translated really well into the home environment, which was heartening to hear, as it seems this is where a lot of Atmos will be experienced,” says Cavagin.

“I can foresee the home market growing more than in cinemas, which seems to be reflected in the amount of times we are being asked for a home Atmos mix, even when the original wasn’t mixed in Atmos.

“Netflix is heading down the Atmos route with its future productions, Sky Sports is already transmitting in Atmos, so TV is leading the way in this,” he concludes.

“This can only mean that mixing for TV drama is going to get more and more exciting from a sound point of view. Let’s hope the production schedules reflect this!”