At IBC, updates to AppearTV’s X-Series Platform were demonstrated.

The X-Series (X10/X20) is claimed to offer the complete spectrum of encoding codecs, and to help broadcasters adopt the many benefits of an IP-centric operation in their own timeframe and with extreme simplicity. 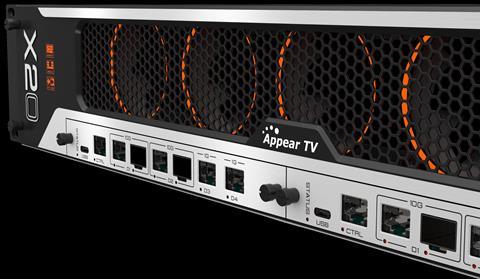 The X20 is said to be ideal for VAR

The modulator also has an RF input that can be connected to a backup transponder, which can then be routed to the main output in case of a hardware failure on the main transponder. The X10 and X20 can each output two transponders featuring switchable L-band or Intermediate Frequency (IF) with 72 Mbaud bandwidth.

In addition to the new modulator, the X-Series also features a new hardware design for its DVB-S2x contribution demodulator, which the company describes as an advanced platform that supports the DVB-S2x DSNG and professional services profiles. It can demodulate four transponders from four RF inputs, with up to 64 MBaud bandwidth, while fixed-key AES-128 and BISS-descrambling are embedded into both the modulator and demodulator.

According to the company, the X20 is ideal for VAR as it fulfils the highly demanding requirements of this application with its channel density and ability to combine encoding and decoding of multiple contribution formats in the same chassis.