The new MGW Diamond OG is a 4K/multichannel HEVC encoder in an openGear (OG) card format.

According to Vitec, the scalable MGW Diamond OG can deliver up to ten UHD channels or 40 HD channels in 2RU. 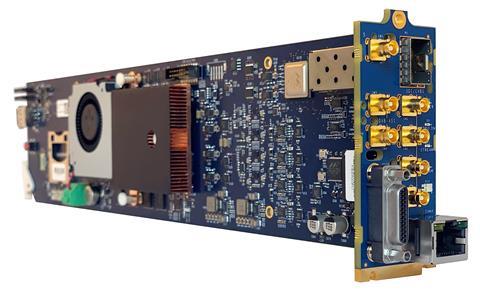 The new unit is a development of its MGW Diamond Encoder, introduced at IBC last year, offering a powerful, lightweight encoder for UHD or multichannel streaming applications in a small form factor.

The MGW Diamond OG enables point-to-point and point-to-multipoint streaming at up to 4Kp60 from either its 4x3G-SDI or 12G-SDI inputs. The card supports 4:2:2 10-bit encoding and multichannel audio, as well as Zixi, and Pro-MPEG and SRT transport protection technology for reliable video, audio, and metadata transmission over lossy networks.