The switchover from VCR tapes to files for the production, transmission, and archiving of telecasts at NHK headquarters (the NHK Broadcasting Centre in Tokyo) was completed in April 2015.

Approximately 2,400 programmes are transmitted each week from files.

The switchover commenced with the production of programmes in the High-definition format.

A project involving the relevant departments at NHK was inaugurated in 2004 to consider the necessary workflows and facilities.

Trials commenced with small-scale file-based systems, given the considerable amount of facilities and programmes involved.

Facilities were established to achieve the switchover in stages, on a programme-by-programme basis, rather than all at once.

This paper will report on the switchover to file-based programme production at the NHK Broadcasting Centre and describe the systems that have been put in place.

The 1998 Winter Olympics in Nagano prompted the NHK Broadcasting Centre to adapt its VCRs for the High-definition television format.

Work on designing file-based systems not relying on VCRs commenced in 2004, in view of the need to update facilities and to have them accommodate the latest developments in information technologies.

Figure 1 shows the principal facilities at the NHK Broadcasting Centre prior to 2012.

Both production and transmission were VCR-based, the latter relying on carts composed of 50 VCRs to send out programmes automatically.

The Archives also relied on tapes, holding more than 600,000 of them.

There were numerous other VCRs elsewhere at the Broadcasting Centre, which were also targeted for conversion to file-based systems.

This paper will discuss the switchover to file-based systems for programme production.

Facilities at the NHK broadcasting centre prior to 2012

Files not reliant on a recording medium allow for a more efficient workflow.

Server networks can be easily established for sharing and quickly forwarding material.

A system based around a central server was adopted and put into operation for news production in 2011 in order to harness such benefits (see Figure 2). 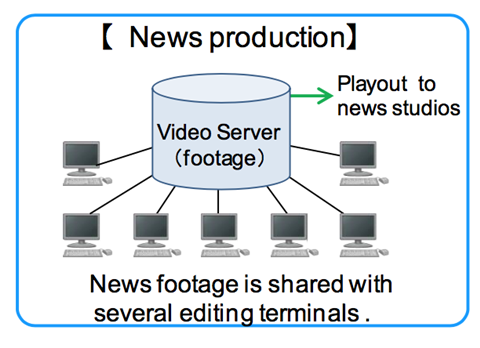 This type of system, however, was not absolutely necessary when it came to the production of other television programmes, given the limited sharing of material among them.

A system based around distributed servers was therefore designed, taking into consideration a range of factors, such as system loads, workflows, and cost (see Figure 3).

A network of servers or ‘cells’ was created according to programme genre.

The network was made into a hybrid by connecting it to bridge media (BM) handling material on hard disks. Central Server was established for drama and sports programmes to allow for the sharing of material.

Server-based systems were also established for transmission and archiving.

The archiving system was designed to reduce costs and power consumption in a number of ways, such as relying on data tapes for all files and on a cache for frequently accessed files.