There’s set to be a boom in the number of satellites in our skies, as the likes of OneWeb, SpaceX and Project Kuiper compete to provide 5G connectivity in hard to reach areas. But who will win the 5G space race? 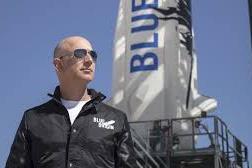 During January, entrepreneur Elon Musk used his SpaceX rockets to launch two batches of 60 ‘Starlink’ satellites into orbit as part of his scheme to populate the planet with mega-constellation broadband-by-satellite services.

Two more launches are planned for February and Musk is planning regular monthly launches this year. By the end of February, there will be almost 360 in orbit and operational from 550 kms (342 miles) high. By the end of 2020, there should be some 720 satellites in orbit. Musk says basic services could be up and running this year to provide cover during the US hurricane season.

Musk now holds the record as the world’s largest fleet operator of satellites and says that his initial service could start with as few as 420 craft in orbit, but 1600 (likely to be in place during 2021) would allow full global coverage.

But Musk is not alone. A London-based company, OneWeb, is doing much the same. Its first launch of 34 satellites was due to happen on February 7th. OneWeb, founded by Greg Wyler, has contracted with Arianespace to launch another 20 rockets with each carrying 34 satellites.

In a brand-new factory at Exploration Park on Florida’s Space Coast OneWeb’s technicians are turning out two satellites a day and building up to a target 15 each week. The target is to have around 600 satellites operational by around the end of this year and providing some basic services.

Besides Starlink and OneWeb there’s another entrepreneur – with very deep pockets – also in the game in the shape of Amazon founder Jeff Bezos. He is backing a spectacular system called Project Kuiper to also provide global access to satellite broadband.

Bezos is hiring specialist engineers now and while he is a little behind Starlink and OneWeb in terms of launch timings his ‘tortoise’ strategy might well end up beating the two hares now busy launching satellites. More on this in a moment. 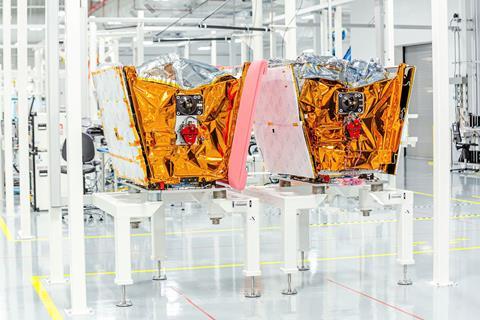 OneWeb satellites at its factory

Low-orbit revolution
The aim for these three – and another couple of minor players – is simple in concept: To revolutionise accessibility to space and at a low cost, and with super-fast speeds. The super-fast speed is down to the low Earth orbits that each of the schemes are targeting and thus achieving all-important extremely low latency.

This question of latency is key. Some geostationary satellites at 35,786 km already provide broadband services but their transmissions take about 500-700 milliseconds to travel up and another 500-700 milliseconds to travel down. This time-lag is why viewers suffer the infuriating time delay during a conversation between the broadcast studio and an outside broadcast unit. If the OB is more than one satellite ‘hop’ away, then the delay is multiplied.

A low Earth-orbiting craft would manage these links in about 25-30 milliseconds, a true fraction of existing satellite links and quite comparable to existing cable or fibre networks. OneWeb says it will supply a ‘round trip’ speed of 238 milliseconds for data.

OneWeb sets as one of its targets to “Dramatically lower the cost in large volumes for high-performance in space.”

Amazon’s Project Kuiper’s plans include putting an overall 3,236 satellites in low Earth orbit — including 784 satellites at an altitude of 367 miles (590 kilometres); 1,296 satellites at a height of 379 miles (610 kilometres); and 1,156 satellites in 391-mile (630-kilometre) orbits. The overlapping orbits are designed to ensure near-complete planetary and line-of-sight coverage and supply ample density of services and capacity to busy locations.

While Kuiper might be some time off the demand for satellite services is undisputed. Robert Swan, CEO at Intel, in a statement on January 20 said there were 38 billion devices connected to the network in 2019. “That’s expected to grow to 56 billion devices by 2025…. that’s roughly seven per human on the planet of devices being carried around or being leveraged to enrich the experiences that we have…. And those things that are being created is called data.”

Above the Cloud
That number only scratches the surface as far as demand for Internet of Things (IoT) and ‘Cloud’-based connectivity is concerned. A recent report from analytics specialists Statistica says that by 2025 there will be more than 75 billion IoT and Machine-to-Machine devices connected (2019 number is 26 billion) and representing a five-fold increase over 10 years.

Add into that mix the explosion in user-generated data, streaming video and voice traffic, and you have a potential business. And to a certain extent, there are satellite operators filling this gap today. The busiest is ViaSat of California, which uses is giant geostationary satellites to broadcast multiple beams beneath their orbits to users below. ViaSat recently announced a 76% jump in “sustained demand” from its terminals used on aircraft to deliver ‘broadband direct to seat’. More conventionally it has almost 600,000 subscribers using its satellites in the US.

Why could satellite broadband succeed?

However, these satellite services come at a cost. Average Revenue per User in the US is a minimum of $50 per month and rising to $150 for heavy data users (and 100 Mb/s service).

Viasat has established WiFi hotspots in places like rural Mexico and available to 1.7 million people. It is busy in Brazil with 15,000 WiFi sites by the end of 2019 and also serving residential, enterprise and aviation customers.

Paris-based Eutelsat (and EchoStar of the US) offer similar services from geostationary satellites.

The major worry now is whether these new satellite entrants can tap into a residential market and win subscribers. OneWeb is initially concentrating on building relationships with local telecoms suppliers. But Starlink is going after the mass market, and where pricing will be crucial. This poses the question of how local marketing and sales will be managed? How will subscribers be managed?

In this respect, we return to the prospects for Amazon’s Project Kuiper. Amazon already has a near-global presence. In January it was confirmed that Amazon Prime has more than 150 million subscribers. Of course, not all of these will need satellite connectivity. But some will. Amazon’s Kuiper is a stealthy, powerful, and very well-financed operation. They could end up being the winners of this satellite race.