The BBC won 11 of the Royal Television Society television journalism awards for 2018, with Sky News and CNN recognised for creative and excellent journalism. 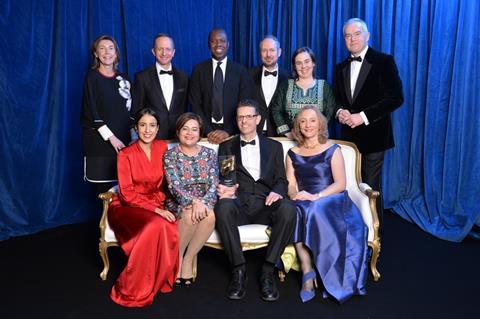 BBC winners of the Daily News Programme of the Year award

News Channel of the Year went to Sky News as did the Breaking News award for its coverage of the Manchester Terror Attack. CNN International was rewarded with Scoop of the Year for its enterprising storytelling about the Libya Slave Market.

“The entries for the Breaking News category focused on two terrible tragedies here in the UK - the Grenfell Tower fire and the Manchester Bombing. There were extraordinary demands made on broadcasters in matters of speed of response, sensitivity in dealing with grieving families and friends, and the delivery of context and explanation while events were still unfolding. The winning entry provided all this as well as a remarkable background exclusive within hours of the event happening.”

“This was a really powerful portfolio, the camera operator had an amazing ability to tell a story with images, some of which moved the jury to tears!”

“The winning entry was a very impressive piece of television, which included shocking and riveting undercover footage. A compelling watch, and a remarkable young undercover protagonist who became the ‘star of the show’! An outstanding and powerful film, which has had significant real world effects.”

“… an exceptionally strong field…the top three were all serious contenders for the prize. In the end, the award went to a programme that tackled a single event within a major unfolding crisis. Outstanding and exceptional, with great access and interviews. It was well-judged and compellingly told.”

“The winning programme showed the value of high quality journalism at home and abroad. It had the courage to devote time to original investigations - as well as incisive analysis by some of the best reporters and correspondents in the business. It had confidence and authority, whether in the studio or on location.”

“The winning interview was a major scoop that was very delicately handled. The humanity and empathy displayed by the interviewer unlocked moving and heart-rending testimony from a group of people for whom talking about the events being disclosed was a challenge. The interview made headline news and had an immediate and widespread impact.”

Inside Out - An Inside Out Special: Operation Sanctuary BBC News English Regions for BBC One NE & Cumbria

“The judges were blown away by the originality and the journalism behind this story, which took two years to make. It was a quality production with the technical elements skillfully directed. The small team had clearly invested heavily in this hard-to-tell story and overcame legal hurdles to ensure it was broadcast… a standout piece of journalism that raises important moral questions about the secret world of paid informers.”

“This was a brilliantly executed response to a massive and tragic breaking story. The programme had a remarkable degree of authority, with powerful storytelling and compelling pictures.”

“The winner was the presenter whose range and personality best demonstrated not only versatility and warmth - but also a remarkable ability to stay calm under pressure. She conveyed authority on the big stories, as well as good humour and a rapport with the audience on the lighter ones. The tone and incisiveness of her interviewing on Day One of the Grenfell Fire was outstanding.”

“The winner is a relative newcomer to television, but in a short time has established herself as an on-screen presenter with a remarkable ability to connect to viewers of all kinds. Her programmes on football abuse and after the Grenfell fire were standout examples of her empathy combined with authority, and a tenacious determination to hold those in power to account.”

Andrew Neil - BBC News for BBC One and BBC Two

“All three channels demonstrated a remarkable breadth and depth of coverage, each in their own distinctive style. The winning entry offered gripping and brave coverage of breaking news around the world - but added an additional layer of longer-form analysis, and well-judged and compelling campaigning.”

“In a year when home news had some of the biggest stories of the year, the Grenfell fire was one of the most demanding and harrowing to cover. This programme stood out for the range of its journalism - from forensic investigation of the causes, robust interviewing of political leaders, and a commitment to telling the story of the people who lived on the 21st floor. This was an outstanding example of Home News journalism of the highest standard.”

“The winning entry showed incredible storytelling, consistently high standards and exceptional scripting to give a comprehensive sense of what the situation was all about. This was a story only the BBC could do!”

The Demise of ISIS - ITV News ITN for ITV

“The winning entry involved gathering a huge amount of data and writing an original software programme to process it. The judges were particularly impressed that it represented genuine public-interest journalism, holding government to account while being useful to the audience – allowing them to find out how their local hospital services are performing.”

“This was an extremely hard-fought category with several entries worthy of nomination. The category rewards “exclusive, entrepreneurial journalism” and the winning team displayed courage and enterprise on a very dangerous story. It resonated widely with a younger audience via social media. Other journalists had tried to get proof of human slave trafficking in Libya, but this was the first independent verification.”

“From his forensic investigation of election expenses, his dogged pursuit of Paul Nuttall in Stoke and one of the longest doorsteps all the way down Whitehall, this was vintage stuff from a specialist at the top of his form. Tremendous, excellent, outstanding work.”

“The winner has a record of reporting calmly and courageously from some of the world’s most dangerous places, while never sensationalising war. Describing the appalling conditions endured by migrants in Libya, the liberation of Mosul and the suffering of Yemen, the winner showed a range and depth which marks them out from a very strong field as a worthy winner.”

“This was an extraordinary film, beautifully shot and portraying the reality of war, but with great humanity. It was refreshing to hear so many local views in a film like this.”

“The winner showed exceptional bravery and is wise beyond her years. Along with great access, she also had good scripting and a very understated delivery.”

“Dorothy Byrne started in local newspapers, where according to one of her early bosses: “She’d happily walk into any pub in any grotty area you can imagine, announce what she was up to and the sort of people she wanted to find, and hey presto! At the other end of the scale, she also considered that close attention to ‘Hello’ magazine was a vital part of the investigative journalist’s armoury.”

“She went on to run ITV’s “The Big Story” where her formidable story-telling skills and fertile ideas were brilliant assets. She has been at the helm of Channel 4’s journalistic output for many years. In that time, all her great qualities have come to the fore: her intellectual curiosity, her openness to new ideas, her constant challenging of herself. Her programmes have garnered all the awards this industry can give, many times over, and she has nurtured the careers of innumerable television journalists, especially women, and ensured that Channel 4 supports an MA in investigative journalism to bring people from different backgrounds into this area.

“She is fearless, her ferocious loyal and totally committed to public service broadcasting.”

“The Judges award recognises an outstanding contribution to the advancement of Television Journalism in the past year. This was one of the stand-out TV moments of the year. Ten o’clock on election night and who can forget where they were when they heard the result of the Exit Poll. The poll stunned the country and caused at least one person we know to shed a little tear. For the last three general elections, the joint ITV, Sky and BBC exit polls have been uncannily accurate. But what makes this year’s Exit Poll even more outstanding is that the team of political scientists, psephologists and pollsters behind it had only seven weeks to put it all together.”