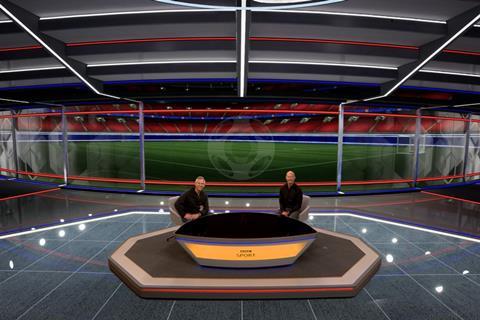 BBC’s Match of the Day will celebrate its 55th year by moving to a new virtual reality studio based at dock10.

Back in May, dock10 – which is based in Manchester’s MediaCityUK – unveiled its new 4K UHD ready virtual studio capability. The new studio utilises Epic Games’ Unreal Engine 4 (UE4) rendering technology to allow programme makers to create photorealistic output in real-time.

The system aims to enable studio sets to combine physical and virtual elements in such a way that they are indistinguishable from each other. It allows cameras to point in absolutely any direction across the whole of the studio to deliver a seamless on-screen set.

Match of the Day is being shot in the dock10 studio for the 2019-20 Premier League season, which kicked off last weekend. MOTD shows weekly highlights of the English Premier League and is the focal point of the BBC’s football coverage, alongside Match of the Day 2, Football Focus and Final Score, which will all be shot on site.

Match of the Day is aired on BBC One and BBC iPlayer, reaching an average of 7 million viewers each weekend. This season, it continues to be fronted by former England footballer Gary Lineker, who will be joined by an expert panel to offer insight and analysis of the Premier League’s action.

Lineker, who is in his 20th season presenting the show, will be joined on the BBC Football team by former players Peter Crouch, Micah Richards, Tim Cahill and Karen Carney.

The BBC did not disclose how it plans to integrate the new capabilities offered by dock10’s studio into its programming.