Behind the Scenes: This Is The Night Mail

Flexible Production: A number of feature films have been completed under coronavirus guidelines but among the first in the UK, possibly anywhere in the world, was This Is The Night Mail. 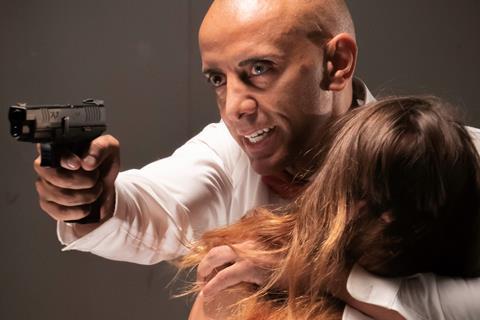 This is the Night Mail: Among the first feature film completed under UK Coronavirus guidelines

Reay is a former writer and producer in the BBC’s film department for eight years and head of Red Bull’s cinema division with feature writing credits including Bring Me the Head of Mavis Davis, Gallowwalkers and Mindgamers, the latter two directed by Goth and starring Wesley Snipes and Sam Neil.

Quarantined at home like everyone else last March, Reay took the opportunity to revisit a long-cherished idea for a screenplay.

“As a writer you are often torn between spending time writing passion projects with no certainty that anybody will want to read or those writing scripts that already have some kind of finance and that may be optioned by a distributor. The need to make a living is often the driving force.

“When everything closed down suddenly there was no-one chasing me. No-one banging at the door. I needed to scratch the itch and get it done.”

The itch was an idea that Reay had had in several months earlier when walking to a meeting in Belgravia. She had passed a row of five classic red telephone boxes. “I don’t know how to explain it but something lodged in my brain. I couldn’t shake this striking visual.”

From that germ, under lockdown, emerged This Is The Night Mail, a story she describes as a love letter to London, and a satire on the gig economy with a supernatural twist.

Greenlighting production
She hadn’t scripted with Covid shooting conditions in mind, assuming like many of us that lockdown would be a temporary affair. As restrictions dragged on and Pact released its first return to production guidelines she and Goth decided to direct Mail and to fund it themselves.

“Pact guidelines knocked out a number of the projects we had in train but of all the ideas we were juggling it was Night Mail which seemed most suitable,” she says. “Since I’m perpetually spending my time asking investors to invest in scripts I’ve written I also thought it would be appropriate at this time, if we’re asking other people for their time and effort, to put our money in. The minute you get financially comfortable you stop being creative.” 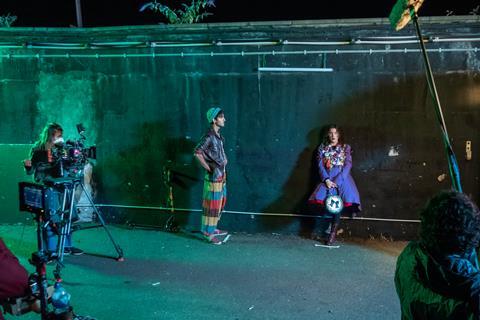 Restrictions: The team tried to limit close contact between actors and film crews

Serendipitously, the interaction between characters in the film was mostly between an actor and a ghost. In other words, with actors acting with themselves – a perfectly Covid-safe scenario. The story also takes place over 24 hours meaning the actors could start and finish in the same costume.

“I can’t imagine how a period drama could be done, certainly at that time when we were all figuring out safety protocols,” she says.

Zoom casting
Plans to shoot in several locations around London were shelved in pre-production. Instead they found a make-shift sound stage at a disused abattoir at King’s Cross which studio hub Tileyard plans to develop into a fully functioning production space.

Casting for the film’s 34 actors was completed over Zoom.  “We couldn’t risk any last-minute casting so we worked incredibly fast with Zoom auditions and fully cast a month before shooting, including all the minor roles,” Reay says. “Everybody signed Covid safety procedures and undertook to report any sign of infection to our dedicated Covid officer.

A team of runners was enlisted to ensure hand sanitisation, regular face mask changes and to clean the surfaces of all kit, props and craft stations.

“That’s an entire tier of work we’ve never had to have before,” she says. “Working in a bubble and maintaining social distancing on set was, initially, very daunting. Filmmaking is a very social and intimate experience especially on set but it did turn out to be achievable as long as the processes are in place. For instance, nobody could share a walkie talkie as you would normally. Each handset was assigned to each individual, there was no sharing.”

Social distancing measures and limits to the numbers of people on set at any time restricted the usual flow of communication. That was not necessarily a negative.

“We had to choose what to say and who to interact with and to make sure every single interaction counted,” Reay says.

There was no budget to have actors and crew isolate in a bubble – for which read hotel. Instead, everyone was responsible for travelling to and from set. The actors had to take care of their own hair and make-up. At the end of a day’s shoot they would put their costume in a bag to be sanitised overnight ready for pick up the next day.

Shooting on Alexa
Stylistically, the film’s grammar changed too. Cinematographer Beatriz Sastre essayed what Reay calls a “extremely photographic style” rather than the raw, handheld look typical of stories with a younger target audience.

“We decided to deliberately go for something more formal; far closer to something director Wes Anderson might conceive,” Reay explains. “This allowed us to have a very composed frame. For instance, we could position actors symmetrically either side of a doorway whilst at the same time giving them social distance.”

The film was shot on Arri Alexa Minis paired with Cooke S4i lenses, a package that would be normally outside the boundaries of the film’s small budget. Rental company VMI stepped in with a discounted deal.

“We had absolutely no hope we would shoot on Alexa. We were prepared to borrow cameras from friends and colleagues until we met with VMI.”

“When the actors arrived on set, we put the two of them together, like two sides of a dance,” Reay explains. “On the few scenes which necessitated actors and crew to be really close to each other we shot quickly for the least amount of contact time.” 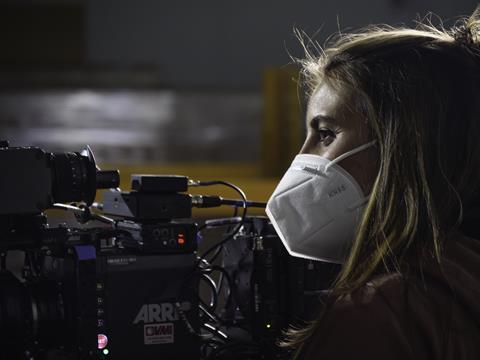 PPE: Shot A and B units in parallel to ensure Covid standards

Shooting in parallel
With all the PPE and health safety procedures in place, Reay chose to squeeze the picture’s normal 18-day shooting schedule into nine days by shooting A and B units in parallel.

“Once we’d brought our team together the onus was on me to go forward. Everybody gave of themselves to make it happen come hell or high water but there comes a moment where you can’t exploit people’s goodwill any longer. It was not possible to shift our schedule back.”

The intense timeframe was extremely stressful for her, she admits. “You get no downtime because you’re constantly running between one unit and another but it’s the only way we could maintain Covid standards. I’m not sure we could sustain this over an eight-week shoot simply because everyone’s vigilance would naturally begin to flag.”

“On the few scenes which necessitated actors and crew to be really close to each other we shot quickly for the least amount of contact time,” Joanne Reay

The film’s editor, Steven Forrester, also directed B camera, partly because he was keen to expand his experience in that area but also as a smart means for him to keep in touch what was being shot.

“Since we were filming in parallel it made sense to work with someone who was closely involved with the footage,” Reay says. “It meant Steven could collect dailies from (digital technicians Notorious DIT) and then load into his laptop and watch rushes to make selects while on set. We’ve worked together before and I trust that his instinct of what I want in a good take is the same as mine.”

With offline complete, the production is in the latter stages of finishing by Michael Pentney, co-founder at Fantomeline Pictures. Like the grade, the final sound mix is being conducted remotely. Reay hopes to have the trailer ready by earlier February and the film ready to show to buyers by the end of March.

Meanwhile, Reay is already embarked on another feature production that, similarly to This Is The Night Mail, can be shot in a contained environment and with multiple crews in parallel.

“If all goes well, I’d look to shoot in the summer, if restrictions have been sufficiently lifted,” she says. “This Is The Night Mail is proof of concept to show financiers that there is a way to shoot safely.”