Blockchain in Broadcast: NFTs and why they’re important

In this article, we’ll explore what blockchain technology and the rise of the NFT means for the world of broadcasting and media in general. We’ll also look at some of the ways it could change the way we consume content. 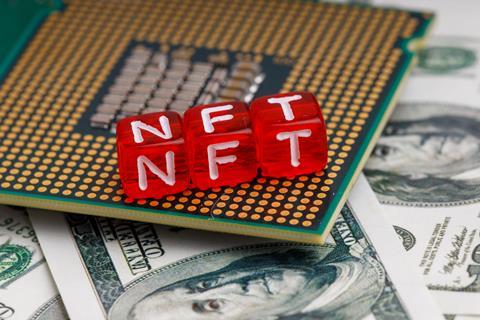 While many fortunes have been made and many more lost in the blockchain universe, the underlying utility of blockchain remains tantalising for broadcasters and media rights owners across the spectrum.

The ability to record data, whether of a transaction taking place, or of a set of specific datapoints that can be captured and ‘frozen’ in time, offers many exciting possibilities.

To date, trials have been made using blockchain to document everything from recording contracts to the provenance of foodstuffs, attaching an immutable record of sustainability to goods that can then be used to demonstrate a sustainable supply chain. That immutability continues to have many implications for everything from closed-loop consumerism to digital rights management and the future of media consumption.

DRM has become one of the standout applications for blockchain and NFTs in the media industry, as it enables rights owners to parcel up content and sell either the rights to use the content itself, or the right to view and interact with it.

The oft-quoted example of Bored Ape NFTs is just one of thousands of scenarios where digital ‘artworks’ are created, then sold off on an NFT marketplace. Some of these are relatively regulated, some less so. But they all offer considerable opportunity to rights owners.

As JR Griffin, VP, Digital Marketing & Business Development, Fremantle, pointed out in the recent and highly-popular IBC Webinar: Blockchain for media, Freemantle has found the creation of NFTs a valuable enhancement to existing merchandising strategies.

“What we were able to do,” he explains, “was to look at [adopting blockchain] through a licensing model. We have robust licensing teams in our various territories, and we look at launching NFTs much like we will launch t-shirts for a TV show or a mug or similar.

“This helped us get through some of the hurdles that a traditional company might face when entering this realm. We started by launching digital collectibles around the key art of a show called American Gods that we created and distributed around the world. Those were collectible NFTs of character art and key art from the show sold on a platform called Curio NFT. So, people could buy them for something that’s affordable - $50 or $250 - and pull them into their wallets and sell them on OpenSea if they wanted to, or sell them in the marketplace.”

NFT meaning: the ultimate in scalability

The deeper value proposition offered by blockchain and NFTs is that media rights - at every level of the chain - can be enforced seamlessly, removing considerable friction from the current, comparatively ad-hoc system.

A crucial evolution of this concept is the smart contract, where a potentially complex transaction can be almost entirely automated. There are two key areas here - firstly the ‘complex’, where a large number of factors can be baked into a contract relatively easily, and secondly the ‘automation’, which allows even the most complex smart contract to scale almost infinitely.

For example, a film funding request could be fulfilled by any number of parties in a crowdsourcing model, but without any additional friction. Once funds are transferred, the contract is automatically complete, cutting out potentially enormous administration costs.

A recent example of this in action is the Amazon biopic ‘Prizefighter: The Life of Jem Belcher’. Starring Russell Crowe, Ray Winstone and Matt Hookings, the production was partly funded using NFTs. In order to raise funds during filming, props from the set were made into NFTs and then sold via moviecoin.com - the minimum value being just $100.

Solene Marvian, a producer with Film Angels told delegates at the SMPTE UK Media Technology Conference 2022: “NFTs are an extra way to find financing and to keep hold of our rights, and the use of blockchain could be a digital ledger that keeps hold of all the data operations,” she added. “Once we create a community, we will be able to engage and share our project from the beginning. Even if we don’t manage to raise a full budget solely with NFTs it gives us more leverage to go and see other financiers.”

The rewards of buying NFTs to fund a movie can be broad indeed: “The first one could be a one-to-one session with one of the actors. It could be a mention in the credits, or a product placement in the film. The NFT I am most excited about is the one that holds a royalty revenue,” said Marvian.

“The automatisation of rights helps to re-distribute revenue more effectively after each sell, and we can use NFTs during distribution, giving us a new and different opportunity to engage with our audience”, continued Marvian.

There is an ever-growing list of companies offering varying takes on a similar theme, from HollywoodDAO to Roman Coppola’s Decentralized Pictures, First Flights FF3 to start-up NFT Studios, the space is certainly booming.

What is blockchain to media companies?

Tracie Mitchell, MD of Greenfish.io was also speaking at SMPTE: “There is a new industry that has popped out about standards, security and protocols to actually get the media between A and B, and this is completely ignoring the value of the media, and all the financial data is reconciled after the fact,” she said.

“Now, producers are beginning to engage directly with their audience and that audience is coming further upstream in our world, and beginning to be associated with the actual content.

“We are hearing all these terms – Web3, Film3, Metaverse, etc – and we don’t know what it is. In my opinion it is the biggest change to the global business model that we will see in our lifetime,” she added.

“Media companies are going to end up banking broadcast services that they will sell. They will end up just being a wallet.”

One of many companies betting on this coming to pass is Eluvio Blockchain, which late last year saw a $100 million strategic investment from Fox. Eluvio’s Content Fabric solution integrates blockchain with video streaming and storage to allow easier NFT rollouts without getting bogged down in the technology stack. Eluvio has been selected as the blockchain technology provider for Fox’s recently launched non-fungible token (NFT) unit Blockchain Creative Labs, part of Fox’s Bento Box.

The future of broadcasting and film with blockchain

Although the potential of blockchain - and NFTs - is vast, there are still nearly as many questions to answer as the technology solves. For all the granular control of content rights, there are many potential pitfalls, not least in loopholes in the smart contract and technology itself, where tiny oversights can have enormous repercussions, as many have already discovered to their cost.

Just the most recent at the time of writing saw Decentralised streaming music service Audius hacked for more than $6 million in Ethereum, thanks to a bug in the governance smart contract that underlies the platform. An attacker bent the rules of the contract, successfully passing a governance proposal that sent the entirety of the community token pool to an external wallet.

Away from the technical side, there are certainly going to be many challenges around the ownership of the digital rights themselves, as the ongoing court case between Miramax and Quentin Tarantino demonstrates. Quentin Tarantino’s announcement that he would auction ‘Pulp Fiction’ NFTs in late 2021 rapidly triggered a lawsuit from Miramax, stating that the director owned only the print rights to the film screenplay, and that NFTs were not covered by this - based on a 1993 agreement.

It seems pretty clear that blockchain will have an increasingly substantial presence in digital media of all stripes, especially in areas such as the metaverse, which are only just beginning to be investigated. The process will not happen overnight, but it has begun - blockchain is here to stay.