Broadcasters in the UK face an uncertain future, with the deadline for Brexit looming and the prospect of no deal with the European Union jeopardising the country’s position as an international hub for TV.

The Commercial Broadcasters Association (COBA), the UK’s industry body for multichannel broadcasters, has warned that broadcasters need certainty well before the ‘cliff edge’ of the end of negotiations. 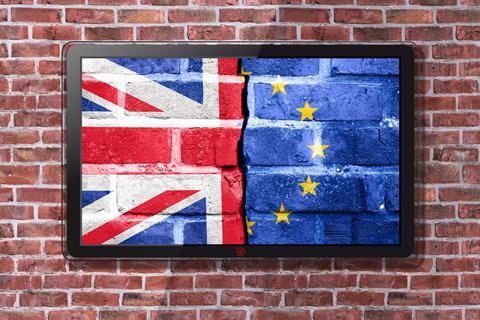 COBA executive director Adam Minns told IBC365: “There is currently no-deal and we are completely up in the air like the entire UK. If we negotiate or crash out at the end of March nothing has been agreed and we might end up with no deal.”

He added: “If there was a deal to maintain the status quo the UK would likely be able to plug the damage that has been done,” said Minns. However, Minns said that was unlikely and the industry is not expecting the status quo to be maintained.

EU rules stipulate a broadcaster with a valid licence in Europe must have a significant part of its workforce in the country where it is licensed and make editorial decisions at its base.

As such, broadcasters could not simply take a licence in another country, it would require maintaining a reasonably sized presence in that country.

“With no clear answers on whether or not Britain will leave the EU with a deal or not, or indeed if Brexit will be delayed, it is challenging for broadcasters to take key decisions on whether there is a need to seek a licence or licences in another jurisdiction.

Larger organisations have the benefit of having legal departments to devise future strategic plans in fundamental, however smaller channels don’t have this resource and could be significantly impacted under a no-deal agreement.

Minns added that the impact would mean a direct loss of jobs and investment from international broadcasters based in the UK.

More than £1 billion a year is invested in wages, content, overheads and the technology required to get channels on air, helping ensure the UK broadcasting sector has the critical mass to compete on the global stage.

However Spanswick explained UK’s reputation as one of the leading creative and technological hubs in the world “is unlikely to be dampened by Brexit.”

He said: “The world-class reputations of broadcasters, independent production companies and technology suppliers among others will not evaporate overnight as a result of Brexit.

The UK is regarded as one of the leading creative and technological hubs and that “is unlikely to be dampened by Brexit,” Spanswick said.

“UK-based companies will continue to offer some of the most compelling reasons for the creative sector to continue to flourish after Britain leaves the EU.”

What are UK broadcasters are doing to prepare?
UK domestic channels including the BBC, ITV, Channel 4 and Sky are among those broadcasters preparing for the implications to exporting its channels to Europe with the goal to continue with business as per usual.

A BBC Studios spokesperson told IBC365: “BBC Studios, a commercial arm of the BBC, operates a number of bespoke TV channels outside of the UK, including some that are broadcast in the European Union.

“We will be keeping the situation under close review to ensure that we can continue to best serve our audiences in any changed regulatory environment.”

A small group of large corporations including Discovery, Modern Times Group, BBC, Time Warner, Sky, 21st Century Fox and Sony own half of all exported channels and use UK licences to access the European Union. Discovery has confirmed in mid-January it was applying for new broadcast licences in the Netherlands for its EU pay-TV channels.

The BBC has been considering Brussels as the location for a new EU base after Brexit to allow it to continue to broadcast across the continent.

BBC director general Tony Hall confirmed to the Public Accounts Select Committee at a meeting in the end of January, it could move some operations outside of the UK with Belgium and the Netherlands on the shortlist.

He said: “We might not need to make it. I hope we don’t need to make that decision, because actually far better to run everything from here.”

A spokesperson said: “The company is retaining its Ofcom licences for its 16 channels in the UK and holds significant investments in the market, including stakes in UKTV, All3 Media and Play Sports.”