The broadcast and media market is currently worth just over $50 billion a year, according to the latest research from IABM DC.

The IABM has been carrying out market valuation studies for a decade, in recent years in partnership with research group Devoncroft Partners through their joint venture IABM DC.

The 2017 edition, which was launched at NAB, shows around 3,000 companies active in the industry trading a total of $50.1 billion. For comparison, on the same basis the IT industry is worth $3.3 trillion. 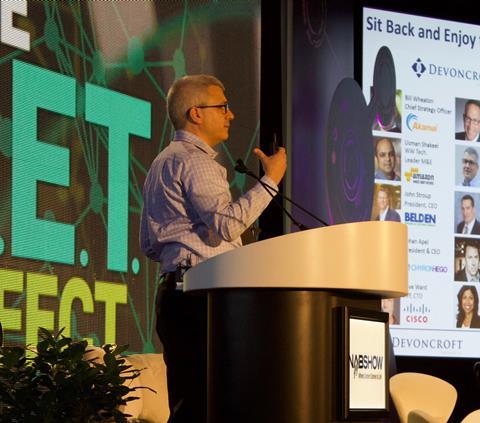 To ensure consistent comparisons, the study has always used a model which divides the supply side into nine distinct segments.

One of these segments, services, now represents 53% of the total valuation. This looks set to grow as the industry moves away from hardware solutions towards virtualised software architecture.

According to the IABM end-user research, 85% of media businesses are likely to use the cloud in the next two or three years, with 28% already using it.

While this suggests a positive response to the IP transition, 75% also considered cyber security as a key issue. Moving content on to accessible networks is seen as a major danger: the resistance to change can be summed up in the common refrain that “no-one ever hacked SDI”.

55% of broadcast and media companies are pushing 4K and Ultra HD; a further 35% have no plans to introduce it

The market valuation study found that 65% of vendors are currently profitable, although this is biased towards the larger companies. There are 13.5 percentage points between the average profitability of the big companies in the business and SMEs.

For the customers, the media companies themselves, 93% are profitable, with only the newest online services which are still investing heavily reporting losses. One interesting finding is that, globally, a significant number of subscription broadcasters report they forecast a fall in revenues.

’We looked at new business models to reduce capex, but when the rubber hit the road there was very little take-up’ - John Stroup, Belden

While Ultra High Definition is a hot talking point at the moment with vendors keen to show the latest developments interest among media companies is less marked.

The IABM study found 55% of broadcast and media companies pushing 4K and Ultra HD into the future, with a further 35% saying they have no plans at all to introduce it.

This lack of enthusiasm is probably explained by what is seen as a low revenue potential for Ultra HD with broadcasters unable to see a way to make money from it.

There is general agreement on the two important transitions which are dominating the industry: the move from hardware to software, and the move from capex to opex.

The transition to IP is uppermost in the minds of all media companies.

However, best of breed solutions are still key: 80% of media companies rank it as important and 95% see interoperability between software systems as critical for the future.

Significantly, 67% of end users are currently unaware of the initiatives surrounding interoperability. With SMPTE launching its final candidate version of its ST2110 suite of IP standards, these concerns should be alleviated.

The second significant transition, from capex to opex, has very different impacts on vendors and users.

Prime Focus Technologies Chief Executive Ramki Sankaranarayanan said: “Media company CFOs ask me if it will cost more to move to opex. I tell them that the cashflow they will release can be put into content which will make them far more money than anything they may lose on the total cost of ownership.”

Ross Video Chief Executive David Ross explained that in the capex model they sell a product for 100% of its value, but moving to a licence model means they they might get 10% of the value a year for 10 years.

“That is destabilising for a company,” he said. “To get into a service model you need to have a lot of cash or you cannot invest in R&D.”

Some vendors have been offering opex services for some time.

Grass Valley, for example, has been offering guaranteed availability of cameras – with replacements for faulty devices available at short or no notice – for more than a decade, without much take up.

John Stroup, CEO of Grass Valley parent company Belden, said: “We looked a new business models to reduce capex, but when the rubber hit the road there was very little take-up.”

It seems that traditional broadcasters remain much more conservative than new media companies, just as traditional vendors are being forced to find new ways of competing in the new media atmosphere.