Can Netflix and Amazon be overtaken?

Competition around the world is ramping up for the OTT leaders from other big tech firms, local specialists, traditional channels and pay-TV operators.

When discussing the OTT business, it’s tempting to characterise it as a global carve up between big spending SVOD streamers Netflix and Amazon Prime. 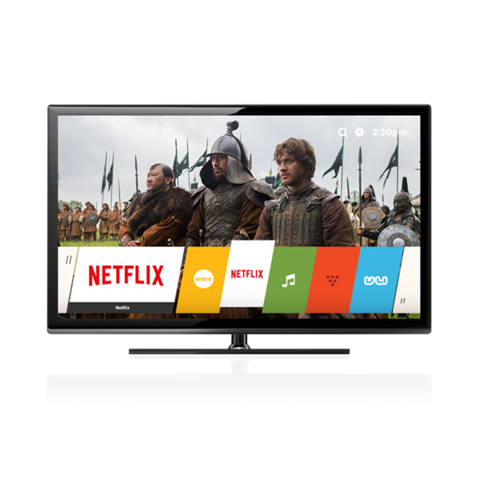 While the two businesses clearly dominate the US (69% of OTT subscription revenues between them, according to analyst Ovum), the situation is much more complex and nuanced when assessed market by market.

In some territories, for example, there has been pretty effective resistance by local pay-TV players, which have countered the arrival of Netflix and Amazon with their own competitively priced OTT services (such as Sky’s Now TV in the UK and MTG’s Viaplay in the Nordics). In others, such as China and Russia, protectionist regulation has made headway difficult.

It’s also something of a misconception that Netflix and Amazon are the only US media giants rolling out OTT operations internationally.

Take the Middle East, where Netflix is reckoned to be running second to Starz Play Arabia, a pan-regional SVOD service that has Lionsgate as a major backer; or Asia-Pacific where Singtel joined forces with Sony Pictures Television and Warner Bros to launch regional SVOD platform Hooq.

Also in this camp is Time Warner-owned HBO, with on-demand offerings in markets including the Nordics, Asia and Latin America.

If anything, HBO just got more interesting following the news it has teamed up with Turner to add a kids component to its Nordic offering, Toonix.

There are other challenges to Netflix/Amazon hegemony too.

Like Hooq, PCCW’s Viu and iFlix (backed by MGM) are both seeking to make headway in Asian markets before Netflix has put down deep roots.

In Japan there is a localised version of Hulu that belongs to leading commercial broadcaster Nippon TV, and all over the world there are niche services seeking to take a percentage or two out of the OTT market (WWE etc).

To this list should be added YouTube Premium, the revamped Red, which was launched into 17 territories in mid-June 2018.

And then there are newcomers like Salto, an attempt by France’s big free-to-air broadcasters (France TV, TF1 and M6) to counteract Netflix’s recent surge in growth in France. 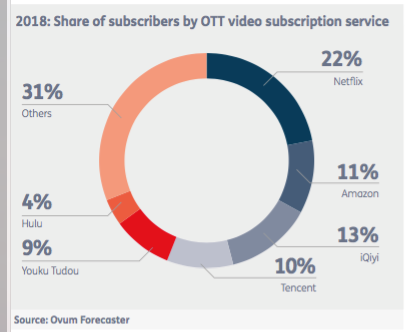 Ovum’s assessment of the market is that there are currently at least 19 countries where Netflix will not be the number one by the end of 2018, despite its massive investment in content. Iflix, already referenced, is probably ahead in Indonesia while Ipla in Poland and Showmax in South Africa also lead the way.

Explaining how other players have managed to get out in front of Netflix, Ovum cites a number of factors such as first-mover advantage, greater emphasis on local content, live programming and more affordable pricing.

On the latter point, it’s worth noting that some Netflix rivals have built a user base by launching advertising video on demand services (AVOD) services – something that sits outside Netflix’s strategic thinking. Viu, for example, has around 16 million AVOD and SVOD users across Asia, meaning it has a large audience base it can attempt to up sell subscriptions too.

AVOD is also a key dynamic in China, with the country’s AVOD revenues expected to exceed $7 billion by 2022. This, coupled with the protectionist rules regarding foreign content, goes some way towards explaining why Netflix is so far behind the likes of iQiyi, Tencent and Alibaba’s Youku Tudou.

Significantly, China’s leading streamers are also starting to have serious success converting free users to paying subscribers. Tencent, for example, has around 450 million users, of which more than 40 million were paying for premium content by late 2017.

“There are several markets where Netflix and Amazon are struggling to achieve the level of success they are used to.” Ted Hall, IHS Markit

“Three Chinese companies Tencent, Baidu and Alibaba are already the second, third and fifth-largest online video providers globally in terms of number of subscriptions, positions that we expect them to cement over the next five years. Netflix is of course the largest, with Amazon fourth.” 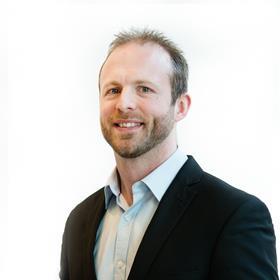 “The dynamic is similar in MENA, where Starz Play and local broadcaster MBC’s Shahid Plus have stolen a march on the international giants. Elsewhere, there are examples of local players aggressively rolling out OTT services to establish leadership in their markets, such as Turkey (Turk Telecom and Turkcell) and South Africa (Naspers’ Showmax). In Russia, Netflix and Amazon trail far behind the likes of local players MegaFon, VEON and MTS.” 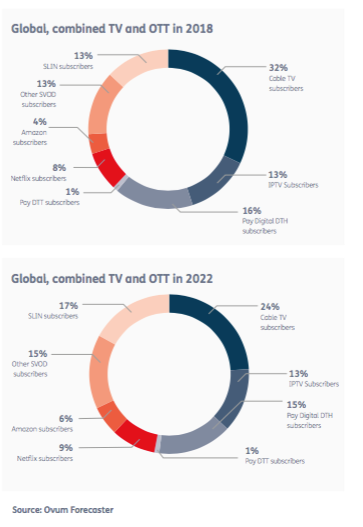 Going forward, a key question is whether Netflix and Amazon will get stronger – or whether they’ll lose share to rivals: “Excluding China, Netflix and Amazon account for around 60% of global OTT video subscriptions – a dominant share,” says Hall.

“But competition is coming from other big tech firms (eg Google/YouTube), local specialists (eg Iflix), traditional channels (eg HBO) and pay-TV operators executing virtual pay-TV strategies (eg Sky). As these services gain traction as either alternatives or complements to Netflix and Amazon, Netflix’s lead will decrease, with its share of subs (ex China) falling from 42% in 2017 to 36% by 2022, according to our forecasts.”

Hall expects Netflix and Amazon to be “the most popular subscription video choices for consumers in most markets – but they will be part of a selection of services alongside: offerings like Now TV; direct-to-consumer offerings from traditional channel brands, whether international (eg HBO, Discovery/Eurosport) or local (eg ProSiebenSat.1, Nippon TV); and genre-based SVoD offerings (e.g. Hayu, WWE Network).”

The view that Netflix will see its share slide is backed by a number of analysts (Amazon is slightly different – in part because it has arrived in a lot of markets later, and also because its SVOD offers sits within a broader set of services).

Digital TV Research, for example, says that OTT in Latin America is booming, but that Netflix will see its overall share of the market slip from 62% in 2016 to around 50% in 2022. This is because it is facing competition from a mix of international and local services including HBO Go, Crackle, Movistar Play, Amazon Prime Video, Claro Video and Televisa-owned Blim.

Ovum principal analyst Tony Gunnarsson goes further – identifying a threat to Netflix in the shape of skinny bundles, or what Ovum refers to as SLIN (subscription linear on-demand). In a report entitled ‘Will SVOD dominate by 2022?’, Gunnarsson, suggests we are poised to enter “a post-OTT” world where Netflix’s “rapid rise looks set to slow before declining.”

Gunnarsson says Netflix today is “twice the size of most near competitors for subscribers” and well-ahead of Amazon’s in localisation. “One third of the world’s OTT video subscriptions (or 176 million),” he adds, “come from ‘other’ SVOD and SLIN services that have less than 5 million subscribers each.”

But, he stresses, Netflix’s growth rates are slowing down. “Despite an aggressive global push, in 2018, Netflix’s global subscriber growth rate will be only 12%. Next year, Netflix is expecting an annual growth rate that’s in single digits (9%). (So) it’s not inconceivable that around 2022–5 Netflix subscriber numbers will go into a decline.”

Gunnarsson continues: “Even taking a conservative view on how audiences will take to linear TV platforms sold on the open internet, it’s clear that SLIN will outpace SVOD for growth in the period to 2022. Recent results from SLIN platforms such as Sling TV and DirecTV Now reveal subscriber numbers at more than 1 million; skinny bundle services PlayStation Vue, YouTube TV, and Hulu with Live TV are not far behind, all circling the 500,000 mark. Early take-up of SLIN in the US suggests it will overtake US pay-TV subscriptions in 2021–22.” 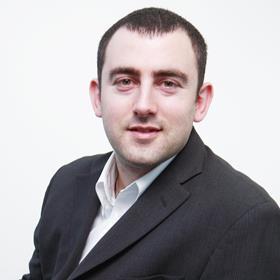 CCS Insight VP for Multiplay and Media Paolo Pescatore also predicts a limit to OTT-style fragmentation: “In reality consumers do not want to sign up to numerous services, receive more bills and be forced to open several apps to find the content they want. Therefore, we will see the return of big content bundles delivered over Internet connections.”

Challenges for Netflix include maximising return on its content investment: “As its content spending continues to rise, a lack of meaningful subscriber growth will dent its profit hard,” he says.

Pescatore adds that it is interesting to see Amazon now following Netflix in telco partnerships. “For OTT providers, partnerships with cable providers and operators will be crucial in attracting new customers. More so as they heavily focus on tailoring content requirements to suit local markets.”

He also takes the view that Netflix must start shifting its focus toward securing rights on a pan-regional basis rather than in each individual country.

And Pescatore anticipates some difficult conversations with major rights holders: “Let’s not forget the decision by Disney to pull its content from Netflix. As more content and media owners launch OTT video services, they too will seek to follow suit in order to differentiate their own offerings over rivals.

”Netflix has no choice but to respond through more partnerships, more original programming and must rollout new services such as a la carte programming to own/rent, and consider moves into other areas such as games.”

Interested in OTT? At IBC2018 the New Platforms: Innovators and Disruptors track will explore who’s aggregating who, the latest monetisation opportunities and the next big OTT disruptors. IBC2018 takes place 13-17 September in Amsterdam.