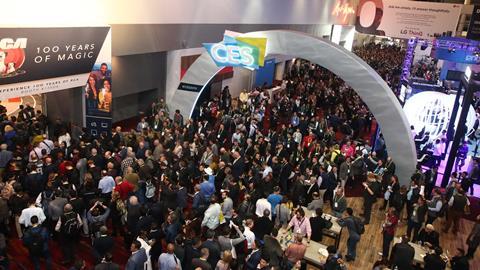 As the annual meeting point for the world’s consumer electronics giants, CES provides a fascinating glimpse into the future of the media and entertainment industry. IBC365 picks the top product launches that could shape the way we create and consume content.

No longer exotic, 8K TVs are now standard issue although manufacturers may struggle to shift them given the limited amount of content (outside Japan). To counter that, each display is fitted with an upscaling technology that takes the input HD or 4K video, churns it through a software algorithm, and spits out a proxy 8K picture.

“Whether a viewer is watching content through a streaming service, set-top box, HDMI, USB or even mobile screen mirroring, [our] proprietary AI-based technology can recognise and upscale any content, regardless of the native resolution, to near pristine 8K quality,” Samsung’s PR explained.

Because the 33 million pixels in an 8K telly are packed so close together it’s difficult to notice any difference from a 4K device, unless you’re sitting just a few inches away from the screen. The TV would need to be enormous too.

Pricing for these giants weren’t revealed but don’t expect much change from €16,000.

Unrolling the future
If they aren’t already, gigantic black plastic rectangles are likely to be deemed an inelegant home décor and an inflexible waste of space to boot. The next wave of home video display is likely to be a lot sleeker and not resemble a TV at all. 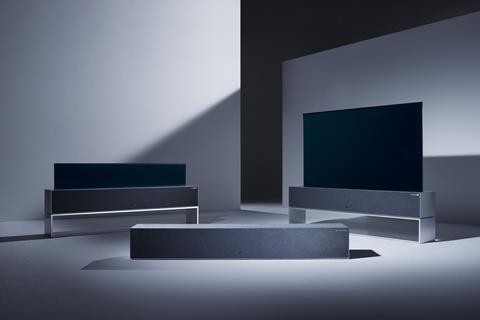 LG has come to successive CES events with prototypes of ‘wallpaper TV’ but this year it promised to make one commercially available. The Signature OLED TV R (or ROLED) features a 65-inch, 0.18mm thin screen that can retract into its aluminium base, which doubles as a 4.2-channel Dolby Atmos soundbar.

As the display is rolled away into its box it exhibits different aspect ratios with the display switching from 16:9 to 21:9. If rolled down to a quarter of its total size, the horizontal display will show things like music playback, news updates or whatever smart home information you set it for.

The company has previously demoed smaller 18-inch versions for rolling up and carrying around.

Meanwhile Samsung has been developing its version of a next-gen TV which can also be giant or portable or anything in between. Composed of millions of tiny LEDs known as MicroLED, its screens can be built bespoke to any size and shape. So, at CES Samsung built the biggest it could, at 219 inches, dwarfing the one it showed last year of 146-inch, as well showing a 75-inch one dubbed The Window which will go on sale in 2019. 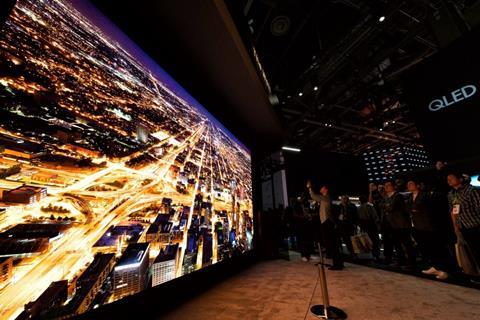 Its modularity opens intriguing possibilities. For example, you might want to watch a sports match on as large a screen size as possible but just tear off a chunk of MicroLed for continued viewing on your way to work. It makes assembly of super-massive screens potentially easier too since any size can be broken down and carried through the front door.

Vendors have only just cracked a way to mass produce OLEDs which use an organic compound to emit light. MicroLEDs can in theory deliver as great or even greater colour and brightness performance with less degradation than OLEDs but manufacturing them cheaply is still an ongoing project.

MicroLeds and the ultra-thin LG tech are also bezel-less, as is Hisense’s 4K short throw laser projector, meaning that you could render an entire wall in your home as a TV or ambient display without having the screen permanently in place.

Athlete tracking for Tokyo 2020
AI-driven athlete tracking is destined to be a feature of broadcast analysis at the Olympic Games 2020. The application, announced at CES, uses Intel hardware and Alibaba cloud computing technology to analyse video of athletes.

“This technology has incredible potential as an athlete training tool and is expected to be a game-changer for the way fans experience the Games,” explained Navin Shenoy, Intel EVP, Data Center Group. “It will create an entirely new way for broadcasters to analyse, dissect and re-examine highlights during instant replays.”

Intel explained that computer vision with deep learning algorithms based on “advanced pose modelling techniques” will generate a 3D mesh that enables coaches and trainers to extract intricate real-time biomechanical data. This is all generated via multiple standard video cameras without the use of special sensors or suits.

iTunes on Samsung TV
Apple doesn’t exhibit at CES but its decision to make iTunes exclusively available on Samsung’s 2019 smart TVs was a significant development. What’s more, Samsung, LG and Vizio can now offer Apple’s AirPlay 2 streaming technology to customers of their latest TVs and older models via a firmware update. AirPlay 2 enables users to send content (stills, audio, video) from another Apple device to the big screen. It also means the iPhone can be used as a TV remote control. Vizio and LG will further integrate Apple’s assistant Siri into their TVs.

These moves come ahead of Apple’s launch of a SVOD service later this year and are designed to give it some parity with apps like Netflix on the screens of the world’s biggest TV brand and a stronger alternative to Google Chromecast. It’s also an acknowledgement by Apple that software (movies, TV and music) will play a bigger part in its fortunes from now on.

Cameras that follow you around
Claimed as the world’s first AI camera, the Obsbot Tail from Chinese start-up Remo is intended to makes it easy for YouTubers or Instagrammers to shoot selfie videos without needing another person to help out with the camera. 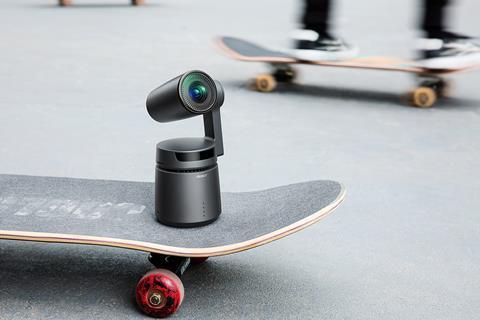 The device has 10 lenses, a microphone jack, a three-axis gimbal and records 4K 60p HDR video to micro SD cards but the selling point is its AI-powered director, which has been taught to move to keep you in frame.

You can trigger over 20 different rhythmed PTZ camera movements and functions like close-ups or full-length scans during shooting. Users can even customise half a dozen gestures to trigger certain camera functions. It’s being crowdfunded on Kickstarter with prices around $450 but is supposedly due out later this year.

A cheaper model doing a similar job, also Kickstarter funded and debuting at CES, is the $140 Pivo. This 149 gram, 63mm sized imager connects to a tripod and can be set to detect a users’ face and follow them around like their personal cameraman. Other modes primed for social media include 50/50 which is half video and half photo and ManyMe which puts the user multiple times in the same panorama.

In-car entertainment revs up
The introduction of driverless cars over the next few decades is predicted to open up an infotainment market worth anywhere from $800 billion in 2035 to $7 trillion by 2050, according to Strategy Analytics. Computer, internet and CE companies are jockeying for a piece of the pie. 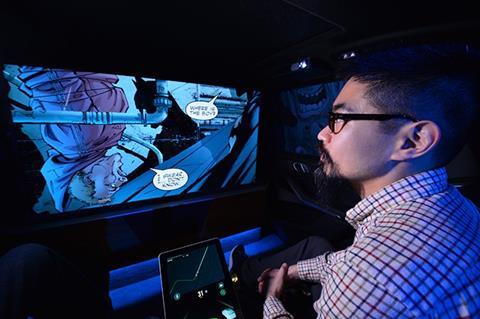 None more so than Intel, which coined the term Passenger Economy for the explosive growth in yet-to-be-realised economic potential when today’s drivers become idle passengers.

At CES it partnered with Warner Bros. to mock-up an autonomous BMW X5 with an experience based on the DC Comics universe. The vehicle’s interior was fitted with a large-screen TV and projectors spanning 270-degrees, mobile devices, sensory and haptic feedback, and immersive audio and lights to offer passengers a virtual ride moderated by Batman’s trusted butler, Alfred. Demonstrations included how passengers might select a movie to see from the back seat of the car.

Both companies have vowed to continue R&D on the vehicle at the Warner Bros. lot in Burbank by gathering feedback through a series of test drives and pilots.

Car manufacturers are wanting in on the game too. Audi was at CES with a technology that enables VR experiences from the backseat. Holoride, devised and marketed by an Audi spin-off, is designed to solve the major hiccup in watching VR content while on the move, which is motion sickness. Its software, which it aims to licence as a SDK to games developers, can apparently match the motion users are experiencing through their headsets with that of the vehicle they are travelling in.

The company said developers could explore ways of incorporating the surrounding environment, like a traffic jam, into the experience. For example, stopping at traffic lights could introduce unexpected obstacles to a game, the company said.

The future of in-cabin entertainment was also a focus of Amazon and Samsung which are making deals to integrate their voice assistants into future car models.

Amazon already has Echo Auto, an in-car accessory that enables consumers to install Alexa into their own cars and announced tie-ups with in-car navigation systems provided by Telenav and HERE Technologies to incorporate Alexa directly into their product

Samsung, which has pledged to embed its voice assistant Bixby into all its product from fridges to air conditioners by 2020, is offering a Digital Cockpit to let drivers do things like remotely check how much petrol they have left. Using onboard cameras, the Digital Cockpit recognises drivers and passengers and sets up the car’s personal space accordingly - adjusting such things as seat height, queuing up favourite playlists and videos on personalised rear seat screens.

Other companies with automotive ambitions advancing AI-driven autopilot systems at CES include Nvidia, Qualcomm and LG which has teamed with Microsoft Azure.

“360 Reality Audio makes it possible for artists and music creators to create a 360-degree musical experience by mapping sound sources such as vocals, chorus and instruments with positional information of distance and angle to suit their creative and artistic purpose,” Sony explained.

The goal is to make listeners experience music that “immerses them in sound from every direction.”

It is getting the music industry on board to create, record and distribute tracks and concerts specially for the format. Live Nation, Warner Music Group and the streaming service Deezer were listed. It showed a reference model of a 360 Reality Audio speaker and plans to launch on Sony hardware including headphones although no time frame was given. It is developing an app which will adjust the audio for each individual based on photographic analysis of the person’s ear.