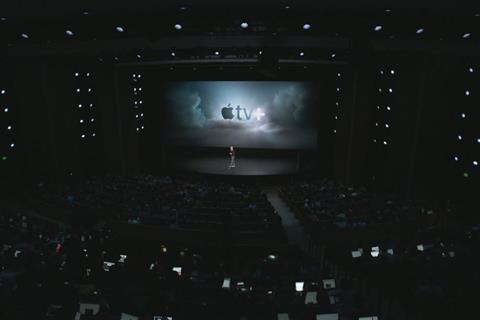 Apple is eying partnerships with cinemas to run its feature-length productions as extended theatrical releases before they become available on its upcoming streaming service.

In a bid to take on Netflix and Disney, the iPhone manufacturer will release its films in cinemas weeks before they become available on the Apple TV+ service, according to sources familiar with the plans.

In a report by the Wall Street Journal the company has made proposals to theatre chains and consulted with entertainment executives as it pursues a traditional theatrical release plan.

Apple is a late entrant to the streaming war, with plans to launch its Apple TV+ service on 1 November for $5 a month to compete with rivals such as Netflix, Amazon Prime, and Walt Disney’s upcoming streaming service Disney+.

Last year Netflix began to debut originals including Bird Box, Roma and The Ballad of Buster Scruggs for a limited time in theatres ahead of releasing it on its platform.

However major theatre chains preferred having films such as Martin Scorsese’s upcoming The Irishman screen months ahead of its online release.

A win for Netflix and other streaming services, in April this year The Academy of Motion Picture Arts and Sciences voted against changing its rules to demand Oscar nominees must play in theatres for a minimum period; with some prominent directors objecting to the idea that their movies would be seen mostly on the small screen.

Apple’s move may help it compete with Hollywood studios for talent. The Californian giant hopes to make it easier to attract Hollywood’s big directors and producers in pursuing this deal and comes after Netflix co-founder Marc Randolph recently told cinemas to “lift their game when competing against streaming services”.

Critics have questioned Netflix’s impact on cinema, with the popular streaming giant allowing short-release dates at independent cinemas for a handful of original films, but ultimately advocates an overall “member-centric simultaneous release model” of putting everything on all platforms at once.

Apple is spending $2 billion on original content this year but remains dwarfed by Netflix, which has a reported $10 billion budget for content and 151 million paid subscribers, as well as the major studios.